The types were ground foragers collected in forest, which is all that is known about the biology of this species.

Not much is known about the the biology of Gnamptogenys albiclava. We can speculate that the biology of this species is similar to other species of the genus. Gnamptogenys are predatory ponerine ants that inhabit tropical and subtropical mesic forests. Nesting is typically at ground level in rotten wood or leaf litter. Some exceptions include species that are arboreal, a dry forest species and species that nests in sandy savannahs. Colony size tends to be, at most, in the hundreds. Queens are the reproductives in most species. Worker reproduction is known from a few species in Southeastern Asia. Generalist predation is the primary foraging/dietary strategy. Specialization on specific groups (millipedes, beetles, other ants) has developed in a few species.

Lattke (2004) - Mann’s (1919) description is comprehensive, but I disagree with his assertion that the antennal scapes surpass the posterior occipital margin by less than their apical width. This length was consistently found to be longer than the apical width, even taking into account the apical flange of the scape. The anterior clypeal border is strigulose and not densely punctulate as he describes. The mandibles are just as shiny as the rest of the body, and the pilosity is yellowish, not black as in Mann (1919). The only other Gnamptogenys with a similarly colored antenna, Gnamptogenys lucida, is also from the Solomon Islands but has only been found on Malaita, not Guadalcanal. It is much smaller (HL < 1.0; WL < 1.3 mm) than G. albiclava and has a metacoxal tooth and a smooth mesonotum. They both share the pointed anteroventral pronotal corner, but lucida lacks the median anteroclypeal projection. This species shares with Gnamptogenys solomonensis, another Solomon Islands endemic, the single stout seta on the basal fore tarsal concavity, lack of a metacoxal spine, and exposure of the dorsal lobe of the torulus. The postpetiolar process in G. albiclava, having two lateral lobes and a median denticle, seems similar to that of G. solomonensis, which also appears trilobed. The apparent lack of a clypeal lamella in G. albiclava is unique in Gnamptogenys, though the anterior clypeal projection could be derived from the lamella. The petiolar node of G. albiclava is not as high and compressed as in other members of this group, but its shape is also unlike the regular convexity of the coxalis or laevior group, with a higher posterodorsal margin on the node than its anterodorsal margin. 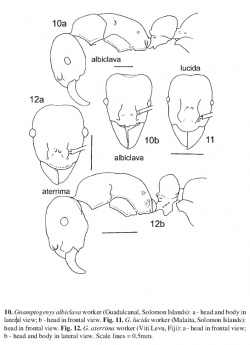