This species has small colonies with one queen and an average of 27 workers.

The lighter-colored specimens of G. cribrata may look superficially like Gnamptogenys epinotalis because of their body color, but G. epinotalis has uniformly round punctae on the postpetiole that are not scalloped. Other characters of G. epinotalis not present in G. cribrata are a narrow sulcus around the katepisternum, a metanotal sulcus, and longitudinal costulae on most of the posterior end of the lateral mesosomal face. G. cribrata keys out along with Gnamptogenys luzonensis in the last couplet of the key.

Lattke (2004) - No ergatoid queens were seen among the four queens examined (from northern Borneo) of this species; all were either winged or previously alated individuals. This is the most widespread species of the epinotalis group and also the most commonly collected. Most of the specimens were found in forested areas beneath logs, one was in bamboo leaf mold, and another was from a soil core.

The abstract of Ito and Gobin (2008) provides the following details about the biology of this species: We describe colony composition and reproductive and behavioural characteristics of Gnamptogenys cribrata. Colonies are monogynous, composed of one dealate queen and an average of 27 workers. This species shows the unusually low number of two ovarioles (1 – 1) in both queens and workers. The queen shows larval hemolymph feeding. Workers laid two distinctive types of egg depending on social environment: in the presence of a queen workers laid small trophic eggs which were not eaten by the queen. In the queenless condition, workers laid eggs that looked similar to a queen’s egg, but did not develop into a larva.

Lattke (2004) - When Wheeler (1924:240) described G. dammermani, he compared it to G. malaensis and separated the two species based on the slight size and color differences of G. dammermani, as well as the presence of propodeal denticles. The examined syntype of G. diehlii is lighter colored than that of G. dammermani and has overall less sculpturing, but darker-colored specimens (previously considered G. diehlii) are known from Thailand. The syntype of G. diehlii has a prominent spiracle on the fourth abdominal segment, but the conspicuousness of the spiracle seems to be an effect of the lighter coloring, and intermediate stages have been found in specimens previously considered G. dammermani. The development of the propodeal denticles, lobes, or ridges varies and does not correlate with any other potentially diagnostic character.

Compared with the forms known as G. dammermani and G. diehlii the syntypes of G. cribrata have more regular costulate sculpturing on the clypeus and the anterior margin of the clypeal lamella is more evenly convex, with much reduced lateral angles as well as a reduced median lobe. G. cribrata also has a very reduced anterior shelf on the petiole when seen laterally. The costulae are partially effaced in a specimen from Manus Island, and the same exemplar has an anterior petiolar shelf. Other specimens have the longitudinal clypeal strigulae much more regular and uniformly parallel, a condition closely approaching the regular carinulae in the forms known as G. cribrata. The extent of development of the anterior lobe of the clypeal lamella as well as the lateral angles of the lamella will vary. Intermediate morphologies can be found in ants previously regarded as G. dammermani. In short, no characters were found that could justify keeping G. dammermani, G. diehlii, and G. cribrata as different species from each other. 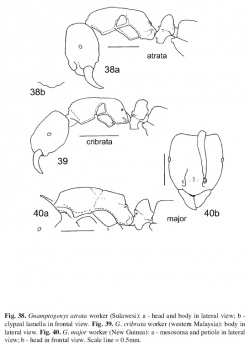