Only known from the holotype worker, nothing is known about the biology of this species.

Lattke (2004) - Other species of the laevior group with a smooth to almost glabrous sculpturing on the median clypeus and mandibles are Gnamptogenys biloba, Gnamptogenys hyalina, and Gnamptogenys leiolabia. These species can be separated from G. delta by the presence of two distinct longitudinal ridges that extend from the anterior end of the frontal carinae down to the anterior clypeal margin, a feature lacking in G. delta. These species also have the clypeal lamella with a broadly convex anterior margin, not angular as in G. delta.

Not much is known about the the biology of Gnamptogenys delta. We can speculate that the biology of this species is similar to other species of the genus. Gnamptogenys are predatory ponerine ants that inhabit tropical and subtropical mesic forests. Nesting is typically at ground level in rotten wood or leaf litter. Some exceptions include species that are arboreal, a dry forest species and species that nests in sandy savannahs. Colony size tends to be, at most, in the hundreds. Queens are the reproductives in most species. Worker reproduction is known from a few species in Southeastern Asia. Generalist predation is the primary foraging/dietary strategy. Specialization on specific groups (millipedes, beetles, other ants) has developed in a few species. 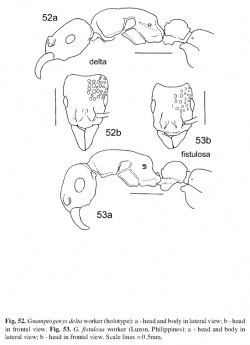 The outline formed by the head and mandibles of G. delta is strikingly triangular in dorsal view, consequently the species name is derived from the Greek word for “triangular,” delta.