This species is only known from types. These specimens were collected from a mixed dipterocarp forest.

Lattke (2004) - The shape of the mandibles, the smooth mandibular dorsum, and the dorsal bulge of the fourth abdominal tergite make this species easy to determine.

Not much is known about the the biology of Gnamptogenys palamala. We can speculate that the biology of this species is similar to other species of the genus. Gnamptogenys are predatory ponerine ants that inhabit tropical and subtropical mesic forests. Nesting is typically at ground level in rotten wood or leaf litter. Some exceptions include species that are arboreal, a dry forest species and species that nests in sandy savannahs. Colony size tends to be, at most, in the hundreds. Queens are the reproductives in most species. Worker reproduction is known from a few species in Southeastern Asia. Generalist predation is the primary foraging/dietary strategy. Specialization on specific groups (millipedes, beetles, other ants) has developed in a few species.

Mandibular dorsum mostly smooth with scattered punctulae, masticatory margin separated from internal margin by sharp angle, the masticatory and internal margins diverging from each other. Tergite of abdominal segment 4 with basal half longitudinally strigose and bulging in lateral view, apical half transversely strigose and straight in lateral view. 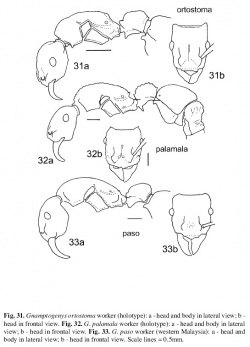 The species name is a compound epithet derived from the feminine Latin nouns for “shovel,” pala, and “jawbone,” mala. It alludes to the shovel-like mandibles of this species.