Nothing is known about the biology of Gnamptogenys sila.

Lattke (2004) - This species is unusual in having punctae that are more or less round, uniformly well impressed and flat bottomed throughout its body. Such depressions are found in other species of the epinotalis group but are usually limited to the head. The areolate area on the vertex of Gnamptogenys major is unique among species of Gnamptogenys, which usually have a few striae or scattered punctae on the vertex but no areolae.

Not much is known about the the biology of Gnamptogenys sila. We can speculate that the biology of this species is similar to other species of the genus. Gnamptogenys are predatory ponerine ants that inhabit tropical and subtropical mesic forests. Nesting is typically at ground level in rotten wood or leaf litter. Some exceptions include species that are arboreal, a dry forest species and species that nests in sandy savannahs. Colony size tends to be, at most, in the hundreds. Queens are the reproductives in most species. Worker reproduction is known from a few species in Southeastern Asia. Generalist predation is the primary foraging/dietary strategy. Specialization on specific groups (millipedes, beetles, other ants) has developed in a few species. 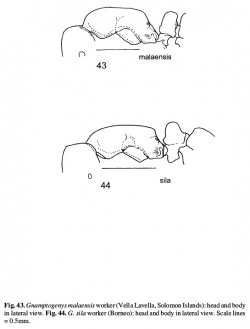 Holotype worker. Malaysia, Sabah, Gunong Silam, 330m, 1983, R. Leakey (A9/72). Deposited in The Natural History Museum. Paratypes. Three workers in the BMNH from the same series as the holotype.

The species name is derived from the name of the type locality, Gunong Silam, and is assumed to be feminine.