Nothing is known about the biology of Gnamptogenys sinhala. This ant is Sri Lankan endemic.

Lattke and Delsinne (2016) - Clypeal lamella projecting anterad as broad triangular lobe; occipital lobes poorly developed. Pronotal dorsum punctate, with rough transverse strigae that arch anterad, becoming longitudinal on posterior pronotum and mesonotum; propodeum unarmed and transversely strigose. The above diagnosis is taken from Lattke (2004: 103) and is placed here to satisfy the provision that a description should accompany a new species epithet for it to be available (ICZN Article 13.1.1). Detailed characterizations and descriptions of this species have been published by Emery (1900), Brown (1954), and Lattke (2004), all under the name Gnamptogenys coxalis. I propose naming the Sri Lankan species as G. sinhala in honor of the Sinhalese people, the largest ethnic group native to Sri Lanka. The new name will be applied to the Nietner collected series with the G. sinhala holotype being the same specimen designated as the G. coxalis lectotype by Brown (1954: 9). So the name G. sinhala now applies to what was previously known as G. coxalis, a species endemic to Sri Lanka.

Lattke (2004) - Roger (1860) described Ponera coxalis as a replacement name for P. rugosa, a homonym coined by F. Smith (1857) for what is now Gnamptogenys costata (=Gnamptogenys coxalis). Roger apparently based his description on a series of specimens from Sri Lanka, thinking they were the same species. Emery (1901) studied type material from Berlin and discerned characters useful for separating the two species, though he hinted at the possibility of its synonymy with Smith's P. rugosa. Brown (1954b) confirmed Emery's characters and cited more differences between G. coxalis and G. costata, though he still shared Emery's second thoughts about its distinctness from G. costata. He studied specimens in the NHMW that Roger sent to G. Mayr from Berlin and designated one of these specimens as a lectotype (Brown, 1954b). The material examined for this revision came from the NHMW bearing a determination label as “coxalis” in what apparently is Roger’s handwriting and the same collection data as the lectotype studied by Brown. The NHMW specimens also conform to Brown’s (1954b) description of G. coxalis. The discreteness of G. coxalis from G. costata is based on the following characters: G. costata has a distinct mesopleural suture; in G. costata the postpetiolar tergite is more foveolate, while in G. coxalis it is mostly strigulose; G. coxalis has a strigulose fourth abdominal tergite, not costate as in G. costata. In G. costata the propodeal declivity is concave and mostly smooth and shining, dorsally bordered by a transverse ridge between the propodeal teeth. In G. coxalis the propodeal declivity is transversely strigose and the dorsal and declivitous faces are not sharply divided by a ridge. The specimens from the ZMHB are minuten mounted, with one lacking a considerable part of the promesonotum.

See the identification section above to learn why a 2004 description is given here for a species named in 2016. 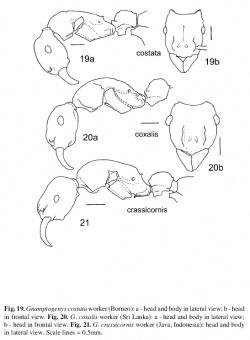