Gracilidris pombero occurs in open areas, and is typically collected in places with some degree of human disturbance.

The only extant member of the genus; see the Gracilidris identification section for characters that separate this ant from other genera.

Wild and Cuezzo (2006) - Body proportions and color vary geographically among populations of G. pombero. In particular, specimens from Paraguay and Argentina are darker and have relatively shorter appendages than Brazilian specimens.

Guerrero and Sanabria (2011) - There are small differences between Colombian populations and the Chaco and Brazilian region ones. The middle region of the posterior cephalic margin is more or less straight in Colombian ants, while Paraguayan and Brazilian ants have a smooth concavity in the middle of the posterior cephalic margin (Wild and Cuezzo 2006: Fig. 1). The trochanters, legs (femora and tarsi), and bulla of the metapleural gland are yellow to brown testaceous in Colombian ants, while in the workers from the southern portion of the range the appendices may become dark brown and sometimes with body parts lighter, varying light brown to whitish (Wild and Cuezzo 2006: Figs. 2 and 3). Despite the minor variations in morphology and color, measurement ranges of the Colombian specimens overlap with the measurements of the populations of Argentina, Brazil and Paraguay.

Wild and Cuezzo (2006) - In the two collection series where nesting information was noted (the Paraguayan type series and the Mato Grosso series), colonies were in soil with the nest entrance consisting of a small earthen turret. The turret of the type series nest in Paraguay was only a few millimeters tall and opened at ground level on one side, so that the nest entrance was cryptic and concealed from above. There appeared to be only one nest entrance. A low level of activity at the entrance of the type series nest and the small number of workers (n = 25) collected during a partial nest excavation suggests a small colony size.

The collection records of Gracilidris pombero indicate that it inhabits low scrub forests of the type found in cerrado and chaco habitats. The specimens from Maranhão were collected at a sardine bait in cerrado scrub forest near the edge of a soybean field. The specimen from Bahia, Brazil was collected in a small primary forest fragment in a Cocoa plantation. The Mato Grosso, Brazil collection was from grazed cerrado, and the Paraguayan type series came from a lightly grazed Copernicia alba palm forest in the humid chaco.

Gracilidris ants are probably nocturnal, which may partly explain their rarity in collections. At the type locality, single foraging workers were collected at dusk and after dark on two separate nights, and visual searches and baits during the day at the same location did not yield any workers. In the field, workers appear elongate, their gaster held horizontally, and their movements are smooth and deliberate.

Guerrero and Sanabria (2011) - The Colombian specimens of Gracilidris pombero came from the western foothills of the Colombian Amazon basin. All specimens of G. pombero were collected in mixed environments highly disturbed by man, as a result of logging and the introduction of livestock grazing. Puerto Arango sites are open grassland areas (traditional grazing system) where the vegetation is predominantly Brachiaria humidicola (Rendle) Schweick (Poaceae alt. Gramineae); San Juan del Barro sites are for silvopastoral systems consisting primarily of pasture with scattered shrubs. 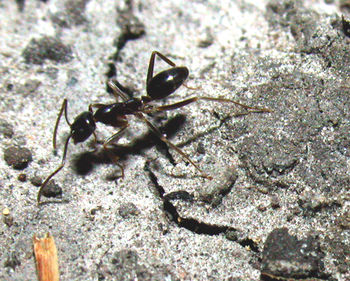 Collection records of G. pombero indicate that this species probably forages actively during the day, through shallow underground galleries (0-10 cm depth), because all specimens are from subsurface samples and none was collected at ground level during diurnal visual searches and at depths greater than 10 cm. Although there are few data on its biology, G. pombero ants from Colombia show a behavior similar to that present in the populations of Argentina, Brazil and Paraguay. Given its current range, wherever it has been recorded, G. pombero is found in open areas with some degree of human disturbance, especially grazing areas. Moreover, the possibility of nocturnal behavior (Wild and Cuezzo 2006) is corroborated by the absence in our daytime sampling, and their appearance in the soil samples.

Feitosa et al. (2015) - Gracilidris was originally described based on specimens collected primarily along the so called South American dry diagonal, which includes the savannah lands of northeastern and central Brazil (caatinga and cerrado, respectively), and the chaco areas of Paraguay and Argentina (Prado & Gibbs, 1993). Until recently, it was thought that the extant lineage of Gracilidris was restricted to the low scrub forests and open fields of this dry diagonal. However, Guerrero and Sanabria (2011) provided the first record of G. pombero for the northern portion of South America, more precisely for the foothills of the Colombian Amazon Basin.

Gracilidris pombero specimens were identified among the ants collected in a long term ecological research (LTER) network (PELD Campos Sulinos – CNPq) at southern Brazilian grasslands. These grasslands occupy a transitional zone between tropical and temperate climates, with hot summers and cool winters, and are composed of several phytophysiognomies and extremely high plant species richness. Vegetation is characterized by an association of C4 and C3 grasses and a variety of forbs and shrub species. Cattle grazing is the traditional land use, which ensures the maintenance of typical grassland vegetation (Overbeck et al., 2007; Pillar et al., 2009).

The records of Gracilidris for Rio Grande do Sul represent the southernmost register of the genus in the Neotropics and the first for the Pampa Biome.

Koch et al. (2018) provided details about new records of this species and modeled its distribution. Collections were made in typical Cerrado vegetation (savanna-like vegetation), 18.5% in agricultural systems (cocoa plantations and small-scale agriculture) or pastures, 7% in the Atlantic Forest biome (fragments with low forest cover and in its surrounding matrix in some cases), 2.3% in urban areas (e.g., university campus), and 2.3% in an abandoned mining area in the south of Brazil. The areas of highest suitability for the occurrence of G. pombero were located in two main zones in South America: one ranging from midwestern Brazil to southeastern Bolivia and Paraguay; and the other spanning the south of Brazil and Uruguay. Among these places, for Uruguay and Bolivia have not been registered any occurrence of the species yet. Other suitable regions include the coast of Northeastern Brazil. Moreover, the model predicted high suitability for the occurrence of G. pombero also in Central America, notably in the south of Mexico, Cuba, Honduras, and the Dominican Republic, indicating that the entire region has climatic conditions suitable for the species. These data reinforce the idea that G. pombero is a species typical of savannas, shrublands and grasslands, which nevertheless can also be found in disturbed habitats, such as forest edges, pasture, crops and urban areas.

As given in the generic description, but with the following additional details:

Head in full frontal view longer than broad (CI 76–81) and quadrate-oval in shape. Lateral margins evenly convex and the head no wider posterior to than anterior to the eyes. Compound eyes large (OI 4.0–6.9), consisting of 130–150 ommatidia, situated near the longitudinal midpoint of the head in full frontal view. Anterior clypeal margin usually bearing a single straight, short, forward-projecting median seta, a longer pair of setae just lateral of the midline that are about half the length of the masticatory margin of the mandibles, and an irregular number (2–6) of small setae lateral to these. Mandibular dentition variable but usually as follows: strong apical tooth, a smaller subapical tooth, a small third tooth, a strong fourth tooth, and the remaining 3 teeth small, spaced more or less evenly along the masticatory margin and separated from each other by 1-3 denticles. Basal angle of the mandible indistinct and bearing 2-4 denticles.

Dorsal surfaces of ant head, mesosoma, and metasoma devoid of erect setae, except abdominal segment 6 which bears a pair of setae oriented posteriorad. Entire surface of body including legs, antennal scapes, and the proximal half of the mandibles covered in a dense, fine pubescence. Pubescence also contains fine appressed hairs twice as long as the adjacent hairs, and evenly spaced about as far apart as their length over the body and appendages. These can be difficult to see without the correct lighting, and are most visible on the gaster. Ventral surfaces of the mesosoma, coxae, and metasoma with a few erect setae. Integument shagreened, ant appearing dull to lightly shining but never opaque.

Pombero is a mythical nocturnal figure in Guaraní folklore. The name is applied here as a noun in apposition in reference to the nocturnal activity pattern of this species.