Schmidt and Shattuck (2014) - Workers of Harpegnathos are virtually impossible to confuse with those of any other genus. They are among the most morphologically unique of all ponerines, and their scythe-shaped mandibles and huge anteriorly set eyes instantly identify them. Other diagnostic characters (in combination) include the presence of ocelli, an obsolete metanotal groove, a laterally opening metapleural gland orifice, toothed tarsal claws, prominent arolia, a long nodiform petiole, a short rounded anterior face of A3, and a strong girdling constriction between pre- and postsclerites of A4. 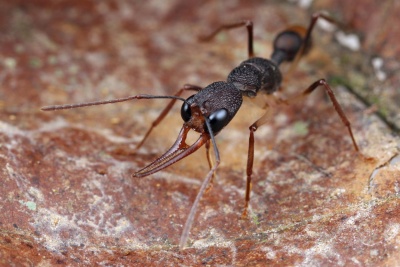 Harpegnathos is morphologically and behaviorally one of the most unusual and interesting of all ponerines. Its bizarre scythe-shaped mandibles and huge eyes are instantly recognizable, and its jumping abilities and visual hunting strategy are unique within the Ponerinae and matched among ants only by Myrmecia (Myrmeciinae) and Gigantiops (Formicinae) (Wheeler, 1922a; Tautz et al., 1994). Harpegnathos is also notable for its nest architecture, which is unusually complex for a ponerine, and for its unique social system in which reproduction is performed both by dealate queens and gamergates. Nearly everything known about the ecology and behavior of the genus comes from studies of the Indian species H. saltator, so the following discussion mainly concerns that species unless otherwise noted. The general applicability of these observations to other Harpegnathos species is unknown.

Harpegnathos are formidable hunters, and their excellent vision, long mandibles, venomous sting, and jumping capabilities make them superbly adapted to hunting fast moving prey (Maschwitz, 1981). Their eyes have the largest number of ommatidia of any ant examined and enable them to be visually oriented to a degree that is rare in ants (Baroni Urbani et al., 1994). Their mandibles are designed for rapid closure, rather than extreme force, with a preponderance of fast muscle fibers controlling mandibular closure (Paul & Gronenberg, 1999; Paul, 2001). Harpegnathos workers have powerful paralyzing stings which rapidly subdue prey (Maschwitz et al., 1979; Maschwitz, 1981) and are also effectively used in defense (e.g., Jerdon, 1851; Wroughton, 1892). The paralysis is permanent, and paralyzed prey may be stored for short periods before consumption (Maschwitz et al., 1979). 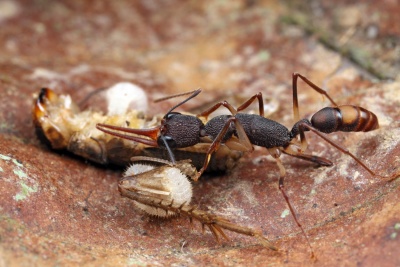 Harpegnathos are crepuscular foragers, requiring daylight to locate prey but preferring to avoid the heat of midday (Shivashankar et al., 1989). They hunt individually in leaf litter and among low vegetation for a diversity of arthropods (Jerdon, 1851; Maschwitz et al., 1979; Maschwitz, 1981; Shivashankar et al., 1989; Peeters et al., 1994; Liebig & Poethke, 2004), though a substantial proportion of their diet consists of fast-running or jumping prey such as crickets, cockroaches, cicadas, flies, and spiders (Maschwitz, 1981; Shivashankar et al., 1989). By enabling them to utilize such prey, which might normally be difficult for an ant to capture, the specialized adaptations of Harpegnathos allow it to fill a niche which is otherwise not fully exploited by ants. 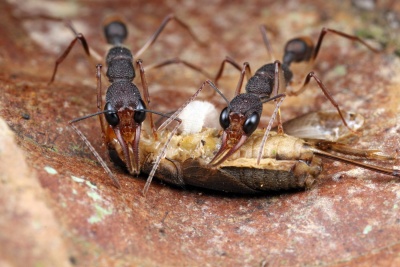 Liebig & Poethke (2004) found no evidence of intercolony aggression in H. saltator despite potentially overlapping foraging ranges, and Maschwitz (1981) found no evidence of chemical recruitment in either foraging or emigrations of Harpegnathos saltator (emigrations occur via social carrying). The chemical ecology of Harpegnathos has not been extensively studied, though Nascimento et al. (1993) examined the exocrine secretions of H. saltator and Gobin et al. (2003b) discovered a unique epidermal gland in H. saltator which may be involved in hydrocarbon production.

Peeters et al. (1994) studied the nests of H. saltator and discovered that they are exceptionally complex by ponerine standards. In a mature colony the nest consists of a series of stacked chambers forming a nearly spherical structure, surmounted by a thick vaulted roof and separated from the surrounding soil by a hollow space. A tunnel leads down to a separate refuse chamber. Peeters et al. (1994) hypothesized that this nest design is an adaptation to survive periodic flooding, which is common in the areas inhabited by H. saltator. This idea is supported by the fact that H. saltator “wallpapers” the surfaces of its nests with discarded cocoons, insect parts, and plant matter. This wallpaper is glued down and probably helps keep the chambers dry. Shivashankar et al. (1989) further observed that H. saltator nest entrances are purposefully plugged with rodent feces or plant matter. Crosland (1995) described one nest of Harpegnathos venator (?, from Hong Kong) as simple, consisting of two disc-shaped chambers separated by a unique funnel-like opening; this funnel could make the inner chamber accessible only via jumping, an effective defense mechanism. However, 4 colonies of Harpegnathos venator from northern Thailand had complex nests similar to H. saltator; F. Ito & C. Peeters unpubl.).

Like most ponerines, H. saltator have small colonies with an average of 65 ± 40 workers (N = 59 colonies from a western Ghats population), and as many as 225 workers (Peeters et al., 2000). H. venator has about 60 workers (4 colonies from northern Thailand; F. Ito & C. Peeters unpubl.). New colonies are founded by a single dealate queen (Peeters & Hölldobler 1995; Peeters et al. 2000). In H. venator, some polygynous queenright colonies have been collected: Crosland, 1995; F. Ito & C. Peeters unpubl.). Like most ponerines, virgin alate queens leave their natal nests, mate, found new colonies, and continue to forage until the first generation of workers are mature, though from this point on the colony’s reproductive life cycle is highly unusual (Peeters & Hölldobler, 1995). Harpegnathos saltator workers retain functional spermathecae (Gobin et al. 2008), and many of them can mate with their brothers inside the nest (Peeters et al. 2000). These mated workers do not begin to lay eggs until the colony’s short-lived queen senesces or dies (Peeters & Hölldobler 1995). In newly orphaned colonies, mated workers aggressively compete in order to achieve reproductive status (Liebig 1998; Liebig et al. 2000). Those that are successful develop their ovaries and begin laying eggs (they are now considered gamergates; Liebig et al. 1998, 2000; Peeters et al. 2000). As the active gamergates gradually lose fecundity or die, new gamergates arise to take their place, and as a result a Harpegnathos colony is theoretically immortal (Peeters et al. 2000).

This complex reproductive system has recently been examined by several research groups. Whereas queenright colonies are generally monogynous, queenless colonies typically contain a large number of mated workers, of which a significant fraction are reproductively active gamergates (Peeters & Hölldobler, 1995). The reproductive status of a Harpegnathos worker is communicated via its cuticular hydrocarbon profile (Liebig et al., 2000), allowing low-ranking workers to detect ovarian activity of their nestmates and to prevent it through aggression (Liebig et al., 1999; Hoyer et al., 2005). Since gamergates have a more restricted behavioral repertoire than infertile workers (as demonstrated by their reduced brain volumes: Gronenberg & Liebig, 1999), the number of gamergates in a queenless colony is tightly regulated to optimize reproduction versus productivity (Monnin & Ratnieks, 2001).

Colonies of most ponerine species die along with their queens, and new colonies arise via independent foundation by a mated alate queen (exceptions include species with ergatoid queens). In contrast, Harpegnathos emphasizes long-term stability (even immortality) of existing colonies. This likely stems from two related factors: the high mortality rates of new Harpegnathos colonies (Liebig & Poethke, 2004), and their elaborate nests, which represent major investments of time and energy. Successful Harpegnathos queens typically only live for two or three years (Peeters & Hölldobler, 1995; Liebig & Poethke, 2004), but by extending the colony’s lifespan through multiple generations of gamergates the colony can utilize the nests for longer periods and produce many more alate queens (Peeters et al., 2000). Colony emigrations and colony fissions are unknown in Harpegnathos and are unlikely, given the major investment represented by the nest and given that gamergate colonies emphasize production of new queens over workers (Peeters et al., 1994; Peeters & Hölldobler, 1995; Peeters et al., 2000).

Queen-worker differences are very slight in Harpegnathos saltator (details in Peeters et al. 2000). To put it simply, gamergates have the same reproductive abilities as queens except that they cannot disperse by flight. Gamergates isolated in artificial nests and fed ad libitum can raise both first and subsequent broods of workers (Liebig et al., 1998), but there is no evidence for gamergate-founded colonies in nature. 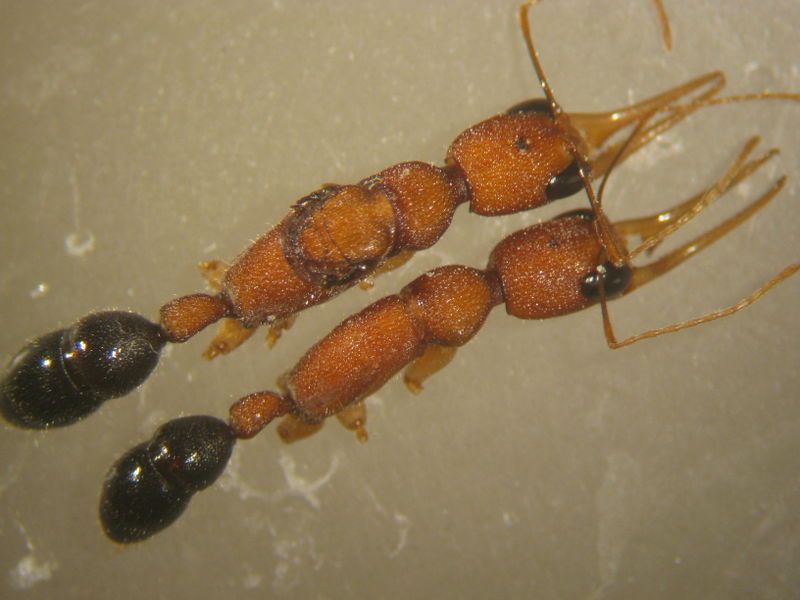 Schmidt and Shattuck (2014) - Harpegnathos was erected by Jerdon (1851) to house the single species H. saltator Jerdon. Soon afterward, Smith (1858) replaced the genus name with Drepanognathus, based on some confusion over possible homonymy with a genus of staphilinid beetles (discussed by Donisthorpe, 1937). Subsequent authors alternated between treating Harpegnathos or Drepanognathus as the valid name (e.g., Roger, 1863a; Forel, 1893a; Dalla Torre, 1893; Bingham, 1903), but eventually the proper consensus was reached recognizing the validity of the original name Harpegnathos (Donisthorpe, 1937). Harpegnathos has also experienced some instability at the tribal level, being variously placed in Ponerini (e.g., Wheeler, 1910), its own tribe Harpegnathii (Forel, 1900b; Drepanognathini: Ashmead, 1905), or its own subtribe Harpegnathini in Ponerini (e.g., Emery, 1911). Smith (1871) even grouped it with Odontomachus in his family Odontomachidae.

Both molecular and morphological evidence support the placement of Harpegnathos in its own “genus group” within Ponerini. Schmidt's (2013) molecular phylogeny of the Ponerinae confirms that Harpegnathos is very closely related to the rest of Ponerini, if not deeply nested within the tribe. The exact placement of Harpegnathos in the phylogeny of Ponerinae is unresolved, possibly due to long branch issues (Schmidt, 2013). The best supported phylogenetic position of Harpegnathos is as sister to the remainder of the Ponerini, but other placements cannot be statistically rejected. Commonly resolved alternative placements include as sister to Hypoponera, the Plectroctena group, or Hypoponera plus the Plectroctena group. Morphological data suggests that Harpegnathos may be sister to the remainder of Ponerini, though it is still an open question. The phylogenetic position of Harpegnathos is arguably the single most important outstanding question in ponerine phylogenetics, given its implications for reconstructions of ancestral ponerine structure, ecology and behavior.

Large to very large (TL 14–20 mm) ants with the standard characters of Ponerini, except that the anterior face of A3 is short and rounded, not vertical. Mandibles long, upturned and scythe-shaped, with a small ventral edge bearing a few teeth and a long medial edge bearing two rows of small denticles. Clypeus shallow and with a nearly straight anterior margin. Frontal lobes very small. Eyes greatly enlarged, nearly half the length of the head, and located at the extreme anterolateral corners of the head. Ocelli present. Metanotal groove obsolete dorsally. Propodeum broad dorsally. Propodeal spiracles slit-shaped. Metapleural gland orifice opening laterally within a deep depression. Tarsal claws with a single preapical tooth. Arolia prominent and bright white. Metatibial spur formula (1s, 1p). Petiole longer than wide, becoming wider dorsally and posteriorly. Anterior face of A3 short and rounded, not vertical. Gaster with a strong girdling constriction between pre- and postsclerites of A4. Stridulitrum present on pretergite of A4. Head and mesosoma foveate and striate, the gaster punctate or foveolate. Head and body with abundant short pilosity and little to no pubescence. Color variable, orange to black.