LaPolla et al. (2013) - In addition to body fossils, the presence of ants can be recorded through ichnofossils (or trace fossils), i.e., the traces of their activity in paleosols such as burrows and nests. In the case of recent taxa, the nest architecture can be very distinctive (Tschinkel, 2003), but such architectures are not found in Mesozoic ichnofossils. The identification of ant nests from the Mesozoic is particularly important because they potentially predate the earliest occurrence of body fossils. Unless body fossils are found associated within such nests, however, it remains virtually impossible to identify the kind of ant that built the nest and even to determine whether the tracemaker was an ant, because different groups of animals may have evolved similar burrowing techniques (Seilacher, 2007). For instance, distinguishing between traces of social insects such as ants and termites can be particularly difficult (Genise et al., 2005). The oldest trace fossils that have been suggested to be ant ichnofossils are from the Late Jurassic of Colorado (Halfen & Hasiotis, 2010; Hasiotis, 2004), but this remains highly controversial and was later dismissed by other authors (Bromley et al., 2007; Genise et al., 2005). The oldest nest that seems attributable to ants is from the Late Cretaceous of Utah (Roberts & Tapanila, 2006). 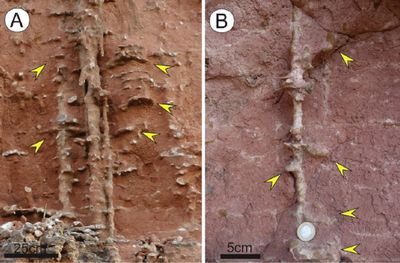 do Nascimento et al. 2017. Fig. 4. Preservation styles of trace fossils in the Marília Formation. A and B) Ichnofossils cemented by carbonate preserved in full relief. Note the yellowish and brownish color of the smooth wall in the lobed structures. Note also that the main shaft occurs in the middle of the structure, surrounded by the lobed structures indicated by arrows.

do Nascimento et al. (2017) - This is the first report of trace fossils potentially associated with insect social behavior in sandy and well drained paleosols of the Upper Cretaceous continental sequence of Brazil. The trace fossils consist of dozens of lobed and vertical structures cemented by CaCO3 and preserved mainly in full relief in paleosols of the Marilia Formation (Bauru Basin) in the state of Minas Gerais. The described ichnofossils are predominantly vertical, up to 2 m long, and are composed of horizontal lobed structures connected by vertical tunnel-like structures that intersect in the center and at the edges. The lobed structures range from 3 to 15 cm long and 2e6 cm thick. Two different hypotheses are analyzed to explain the origin of the trace fossils; the less probable one is that the structures are laminar calcretes associated with rhizoliths and rhizoconcretions. The hypothesis involving social insects was considered because the trace fossils described herein partially resemble a modern ant nest and the ichnofossil Daimoniobarax. The micromorphological analysis of the lobed and tunnel-like structures indicates modifications of the walls, such as the presence of inorganic fluidized linings, dark linings and oriented grains, supporting the hypothesis that they are chambers and shafts. The architecture and size of the reported nests suggest the possibility that social insect colonies existed during the Maastrichtian and are direct evidence of the social behavior and reproductive strategies of the Cretaceous pedofauna.

The fossils are similar to ant nests of the genus Pogonomyrmex. The recognition of these trace fossils in paleosols of the Marília Formation (Maastrichtian) was possible because the architecture described preserves the same pattern of organization and distribution as modern ant nests, allowing comparison with current analogs. The architecture of the trace fossils described here permits their interpretation as formed by ants (Formicidae: Myrmicinae). These structures are very similar to the casts of Pogonomyrmex made by Tschinkel (2003, 2004). They show a higher concentration of chambers in the upper portions, near the surface, and a gradual increase in the distance between the chambers.

As previously highlighted by Smith et al. (2011), the ichnogenera Attaichnus (Laza, 1982), and Vondrichnus (Genise and Bown, 1994), feature spherical to subspherical chambers, which differ from the lobed, pancake and other structures of the Daimoniobarax ichnogen. According to Genise (2017), the ichnogenus Daimoniobarax probably represents the most indisputable fossil ant nests.