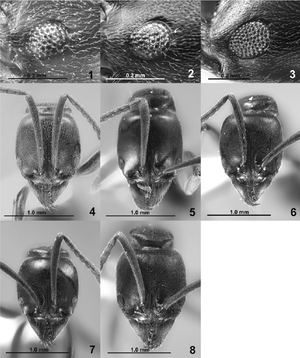 Yamane stated the following in regards to the key and the species it treats: In the present paper I deal with the large-sized species, which can be separated from the others by a combination of the following character states in the worker caste: 1) Head width over 0.9 mm in workers from mature colonies, 2) the number of ommatidia along the long axis of eye more than 10 (usually around 12; Figs. 1-3), 3) antennal scape long, in full-face view surpassing the posterior border of head by more than 1/4 of its length (Figs. 4-8; only in Brachyponera flavipes scape shorter), 4) all the flagellar segments of antenna longer than broad (this condition also applies to some medium- and small-sized species such as Brachyponera chinensis-complex), and 5) petiole relatively thick, with more or less flat dorsal surface in profile (transitional states between thick and thin petioles are found in other species). Among these the character states 2 to 5 may be associated with body size. I have primarily adopted the state 2 to separate the large-sized species from the others.

The Southeast Asian forms may be assigned to the three groups as follows: