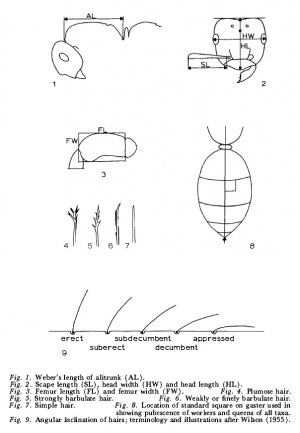 Wing's preface: This key was constructed for typical and near-typical specimens of 7 species in the worker and queen castes only. Males were excluded because they rarely need to be keyed out, and, furthermore, the limits of their variation are poorly known. The 7 included species are sporadic to very common, and are widespread in their distribution. In most areas, over 90 percent of the samples collected can be identified, correctly by using the shorter key. However, there is a danger that the use of this key may occasionally result in the misidentification of a sample. Reference to the sets of illustrations, included in the treatment of each taxon, and to the 15 tables presenting frequency distributions of metric data, located at the end of the systematic section, will greatly reduce this risk. Should difficulty arise, it will probably be either because the species at hand is not 1 of the 7 included in the shorter key or because the specimens are atypical. In case of doubt, use the general key for the appropriate caste, always selecting the queen key rather than the one for workers whenever possible.