Longino also provides the following details regarding distinctive characters for the genus. Reading through this will greatly facilitate making determinations with the key.

Two character systems are normally hidden from view on dry-mounted specimens: mandibular dentition and shape of the labrum. Identification is greatly facilitated if the mandibles are spread and the labrum pulled outward prior to dry mounting. Care must be taken in doing so, because the mandibular teeth are fragile and easily broken, and the labrum easily detaches when flexed outward.

The mandible is a complex three-dimensional structure that is triangular in cross section, with three faces: dorsal, ventral, and interior. The dorsal face is usually in the same plane as the clypeus when the mandibles are closed, and there is a prominent basal ridge that abuts the clypeus when the mandible is closed. The dorsal face rounds into the ventral face which is flat to shallowly concave. The ventral face meets the interior face at a sharp, well-demarcated angle. The interior face is moderately to strongly concave. The masticatory margin, with serial teeth, is at the juncture of the interior and dorsal faces.

Mandible dentition among Central American and Caribbean species is of two forms. One form is a simple row of 11 similar, low, triangular teeth. The other form has an inner row of 3–4 longer, needle-like teeth in addition to an outer row of 10 triangular teeth. Snelling (1968) was the first to describe and illustrate this character, on Eurhopalothrix apharogonia. It is a surprisingly discrete character but is not highly correlated with other characters that are typically used to differentiate species. For example, Eurhopalothrix gravis has a double tooth row and Eurhopalothrix bolaui does not. These are two species that are considered very similar, appearing in the same couplet in dichotomous keys (Brown and Kempf, 1960; Ketterl et al., 2004). 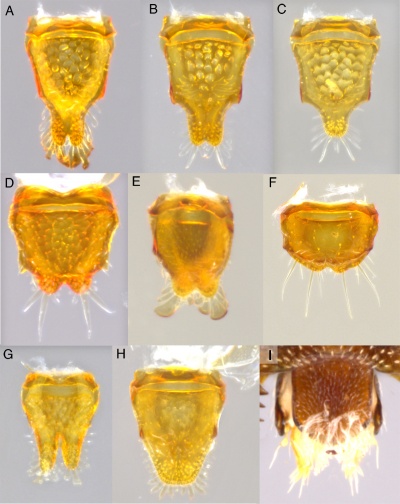 The labrum is a moveable, tongue-like structure that is highly variable. The basal portion is more or less flat dorsally, with the ventral surface concave. The basal portion is delimited anterolaterally on the ventral face by gibbosities that are developed into short, ventrally-projecting teeth. The basal portion is usually surmounted by an apical portion that may be in the same plane as the basal portion or more often bent dorsally. The apical portion may be elongate and subtriangular or short and broad. The apex may be unilobed or divided into two apical lobes. Bilobed apices vary from being no more than a minute apical notch to having a deep cleft separating the two lobes. The apex of the labrum is usually fringed with thick, translucent, soft setae. These setae are filiform, or somewhat capitate, and in two species they are curiously flattened. These setae may also be restricted to a dorsal patch on the labrum (e.g., Eurhopalothrix cimu).

Most species have traditionally been separated based on the distribution and abundance of pilosity on the face, dorsal mesosoma, and first gastral tergite. Pilosity can nearly always be separated into ground pilosity consisting of small short setae, variously appressed to suberect, and much larger and fewer specialized setae that project above the ground pilosity. The ground pilosity varies from thin, sparse, and barely visible, to distinctly spatulate, abundant, and conspicuous. The specialized setae are always at least somewhat thickened and stiff (never flexuous) but vary from being thin and nearly linear, to clavate, to strongly spatulate. In the extreme they are nearly as broad as long, subspherical and "pompon-like" (Brown and Kempf, 1960). More spatulate to subspherical setae are also typically strongly curved, but still projecting above the ground pilosity.

Specialized setae have consistent numbers and locations that vary among species. Placement is typically bilaterally symmetrical. On the face, a typical arrangement is an anterior row of 8 (4 on each side) in an arc between the compound eyes, a median row of 4, and a posterior row of 6 on the posterior vertex margin. In a few species the specialized setae are small and the ground pilosity is large and conspicuous, such that the specialized setae grade into the ground pilosity and are difficult to distinguish. But knowledge of the typical condition allows one to see the specialized setae, slightly larger, "hiding" among the ground pilosity. The promesonotum has up to 6 specialized setae: 2 on the anterior pronotum, 2 on the anterior mesonotum, and 2 on the posterior mesonotum. The first gastral tergite often has two parallel rows of specialized setae down the center, more or less in pairs. There are up to 4 such pairs. The posterior pair may be flanked by another outer pair, forming a row of 4 setae along the posterior margin. For highly setose species, additional setae may occur as irregular rows lateral to the medial rows. Unfortunately, setal counts and locations are averages and vary within species. Some of this variation appears to be ontogenetic, with the occasional extra seta appearing in an atypical location. These are often revealed by being unpaired. However, the larger problem is presumed loss of setae due to wear. The variation of seta number is asymmetrical, with more specimens lacking setae than possessing supernumerary setae. The identification key is developed based on the typical seta count and arrangement for a species, but when keying single specimens (when multiple collections from a locality are not available) one could easily be misled by a worn specimen.