Key to Odonotomachus of the Indo-Australian Region

This is an older key but will work well for many Odontomachus species. 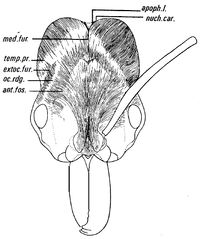 Brown noted the following regarding this key:

Before trying the keys, the user should be aware of the special conditions of measurement of this genus, especially for HL and HW (Headlength is measured full-face in the usual way, except that the anterior limit of the head is normally taken as the rounded anterior swellings of the mandibular condyles, which, though not strictly a part of the head proper, nevertheless do complete the outline of the head in front when one or both mandibles are closed (see Figure 2). Headwidth in ants is usually taken across the widest part of the head; in the present genera, the head is widest in the anterior quarter or third, across the eyes and ocular prominences. But the most striking allometric differences among the species affect mainly the posterior half of the head (vertex), which in Odontomachus and Anochetus is slightly to considerably narrower than the width across the eyes. Because the width across the vertex is a more useful character at species level, I have taken HW as the distance between limits of the temporal prominences. In the few difficult cases in which temporal prominences are lacking, HW is taken across that part of the vertex at which the sides are least sharply convergent (most nearly parallel), near or a little behind the midlength of the head (see Figure 2).). Descriptive statements, especially those concerning gastric sculpture and pubescence, are based on clean, unrubbed specimens; dirty or worn specimens can be misleading. These statements also ignore the normal presence of scattered, coarse piligerous punctures on the gastric dorsum in nearly all of the species.

Queens can often be determined using worker characters, but it should be remembered that queens are usually larger than the corresponding workers, and differ from workers by some allometric characters; e. g., queens often have (proportionately) wider vertex, shorter mandibles and antennal scapes, and anteroposteriorly more compressed petiolar node - the nodal form often being strikingly different in the two castes.