Nests are found under stones, in areas with rocky loam.

Common in the Chiricahua Mountains of Arizona.

Wing (1968) summarized the following natural history information and the alate dates given below. Almost no biological data have been published on Lasius arizonicus. Wheeler (1917) cited 3 localities in Cochise Co. from which the types were collected, giving an altitude of 5000 ft. for one collection. Data associated with the specimens at hand are meager. Four samples were taken under stones, 1 came from a "shaded canyon". Slightly over 20 samples had altitudinal data. With the one exception of a collection made at 2000 ft., they ranged from approximately 5000 to 8500 ft.

Alate dates Eight dated samples contained alates. The extreme dates are June 13 and August 8. On June 13, queens alone were captured on 2 occasions. Dealate queens were taken on July 6 and 8. It is likely that flights begin by mid-June. The collection on August 8 contained workers and males; it is probably a nest collection. Thus flights may still occur as late as early August.

This species is likely to be a temporary parasite, but its host is unknown. 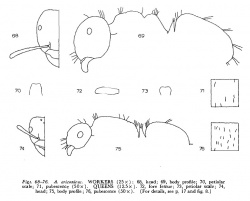