Lasius balearicus displays a peculiar geographical distribution, as it has been solely reported from the top summits of the island of Mallorca. All localities where the species has been collected lay between 800 and 1400 metres above sea level. A typical habitat composition included rocky calcareous surfaces, with sparse and shrubby vegetation, and frequently composed of the endemic plants Hypericum balearicum and Genista valdes-bermejoi. Specimens were collected from nests under stones and on nearby vegetation, frequently tending aphids.

Talavera, Espadaler & Vila (2014) - The species belongs in the subgenus Lasius s. str. as conceived by Wilson (1955). The maxillary palp segments V and VI are subequal in length to segment IV and eye length is at least 0.20 9 the head width. Those two characters in combination define Lasius s. str. The small size, high pilosity, and a distinct coloration are the three main diagnostic characteristics typifying Lasius balearicus.

Using the dichotomous key in Seifert (1992) this species would key to couplet 28 although its morphology does not fit either of the two species under the dichotomy Lasius platythorax and Lasius grandis. Specifically, by the character HL/HW (900) it would correspond to L. grandis and by the character SL/HL (900) it would be L. platythorax. Coloration of L. balearicus is also clearly distinct from that of those two species. Seifert’s (1992) key could be amended as follows in order to include L. balearicus:

The combination of morphology and colour of L. balearicus is unique. Small body size, AND coloration AND marked hairiness characterize L. balearicus. Specifically, the number of standing hairs on dorsal profile of the scape is the highest among known species of Palaearctic Lasius. The number of tibial hairs is also very high, only surpassed by the Asiatic Lasius hirsutus, from which it differs by the much denser gaster tergite pubescence in L. balearicus. Colour is also diagnostic. Taken in isolation, workers of L. balearicus are reminiscent of recently eclosed Lasius grandis or Lasius cinereus, which are the morphologically and phylogenetically closest species. All examined workers have the same, consistent, coloration. When dry, the gaster is somewhat darker that the head and alitrunk.

Within the Palaearctic Lasius s. str. species, the closest species are L. grandis Forel and L. cinereus Seifert, both species having a Western Mediterranean distribution (Seifert, 1992; Espadaler et al., 2011). Lasius grandis, as its name indicates, has a bigger size, with HL (standard deviation) 1.03 (0.06), a less hairy scape and legs, with nHS 22.8 (7.3) and nHHT 25.6 (6.7), and denser clypeal pubescence (PDCL 19.3 (4.9). Lasius cinereus, with its entirely dull mesosoma, is clearly separable from L. balearicus, whose pronotum sides are shining. Hairiness is less developed in L. cinereus, especially in the scape, with nHS 22.2 (3.5), and nHHT 21.7 (2.4). Clypeal pubescence is denser (20.5 (5.1)) in L. cinereus. The molecular phylogeny shows that L. balearicus is sister to both L. grandis and L. cinereus, from which it apparently diverged approximately 1.5 Ma. 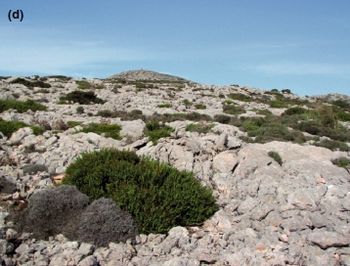 The specific name is derived from the Balearic Islands.