This species is widespread in Europe. It lives only where broad-leaved trees occur (Rigato & Toni, 2011).

Seifert (2020) - Palaearctic Lasius s. str. species belonging to the Lasius brunneus species complex. The species is rather easily identified by a combination of short scape (SL/CS900 0.874), broad head (CL/CW900 1.041), reduced setae numbers on all body parts (nOcc900 2.0, nGen900 0.1, nGu900 1.3, nSC900 0.0, nHT900 0.1, nSt900 1.1) a very smooth pubescence surface on scape and tibiae, and reduced number of mandibular dents (MaDe900 7.06). The dorsal and posterior profile of propodeum are linear and form a distinct, obtuse angle. The petiole is in anterocaudal view rather rectangular or slightly converging dorsad but typically with straight sides and forming a sharp, weakly emarginate dorsal crest. A typical coloration of medium-sized to large specimens is mesosoma, petiole and appendages light yellowish brown, head a little darker bronze brown and gaster dark to blackish brown. However, small workers from initial colonies may show a homogenously dark coloration as seen in Lasius lasioides or Lasius neglectus but can easily be separated by RAV-corrected NUMOBAT data.

For separation from the eastern sister species Lasius silvaticus and Lasius himalayanus see identification sections for those species.

Seifert (2020) - Eurocaucasian, submeridional and temperate. From S. England and Iberia across Central Europe, the Apennine and the Balkans to Asia Minor and the Caucasus. In Scandinavia north to 60°N, absent from Finland. In N. Tyrol ascending to 1410 m and in Anatolia at 37°N to 2000 m.

Collingwood (1979) - This species nests in the interior of old trees, chiefly oak, but has also been recorded from hedgerows. It is fugitive and non-aggressive, rapidly dispersing on disturbance and because of its cryptic habits may be somewhat under-recorded. In Norway and Sweden it has frequently occurred nesting in the timbers of old houses and farm buildings, where its populous colonies may be difficult to dislodge. It chiefly tends tree aphids including the large bark feeding Stomaphis. Single queens initiate colonies in the crevices of old trees but may also be accepted back into the mother nest after the mating flight which occurs in June and early July.

Wilson (1955) - Most European authors agree that brunneus is a timid species adapted to living under the bark and in the wood of tree trunks. Donisthorpe (1927) found a large population of this species in the Windsor Forest of England limited to living trees, which the ants penetrated from the trunk up into the main branches and down into the roots. Various trees were inhabited, including oaks, elm, ash, beech, poplar and maple. It is not clear whether the workers carried on much excavation in the living wood, but this seems unlikely due to the rather unspectacular mandibular apparatus of the species. Forsslund (1949) found brunneus in oaks in dense, undisturbed woodland in several localities in the vicinity of Stockholm. The nests were mostly in dead wood, but occasional galleries penetrated living wood. Scherdlin (1909) found the species in Alsace nesting in the trunks of trees and timber of houses. Clausen (1938) observed a swarm of reproductives inside a house in Zurich. Gosswald (1932) states that in Germany brunneus is found as often under stones as in dead wood; since this observation is divergent from those of other authors, the possibility must be considered that he was erroneously including some alienus in his concept of brunneus.

Donisthorpe (ibid.), who has undertaken the most careful study of this species to date, found workers transporting and tending aphids of the genus Stomaphis. He also observed them carrying psoeids and other small insects to the nests, presumable for use as animal food.

brunneus appears to hold its nuptial flights earlier in the day and season than other European members of the subgenus. Donisthorpe (ibid.) encountered winged queens and males swarming over the trunk of an oak at noon on June 25, and Forsslund (ibid.) saw the same thing from noon to 1:30 p.m. during the period June 10-16. 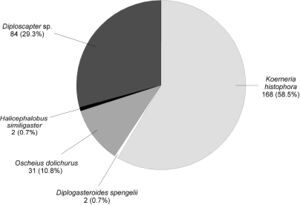 Ratio of determined nematode species which were found in the heads of 114 specimens of Lasius brunneus. Total number and percentage are given (Kohler, 2012, Fig. 1).

Wilson (1955) - (1) Scape shorter relative to head width than in any other member of the subgenus; S1 82-91 in all European series measured; 94 in the himalayanus lectotype and in one specimen from Lahore, Pakistan, both small specimens.

(2) Small individuals (PW 0.50-0.57 mm.), when viewed in perfect full face, with the lateral margins of the eyes not reaching the lateral borders of the head; in Lasius niger and Lasius alienus they reach or exceed it.

(3) Mandibles proportionately shorter, more incurved, and inserted slightly closer to the midline, and head more massive relative to the alitrunk, than other Lasius s. s. (Pl. 1, Fig. 9). Occipital margin viewed in full face flat to feebly convex, as opposed to the typically concave outline of niger and alienus.

(4) Mandible with only two basal teeth in all of seven nest series examined for this character.

(5) Scapes and tibiae completely devoid of standing hairs and nearly devoid of hairs of any inclination. Body pilosity sparse; the curving portion of the occipital angles viewed in full face typically devoid of hairs, rarely with one or two; the latter condition occurs in other members of the subgenus but is highly exceptional.

Size range and dispersion probably about the same as in niger. In a sample of 29, with no more than 2 individuals per nest series, PW range 0.50-0.73 mm., mean with standard error 0.630 ± 0.012 mm., standard deviation 0.063 mm. ML less than EW. Anterior margin of median clypeal lobe and structure of the mandibular basal angle essentially as in the niger complex. The greater massiveness of the alitrunk in this species can perhaps best be expressed as a ratio of alitrunk length to the maximum head depth measured perpendicular to the long axis of the head. Several medium-sized brunneus gave such a ratio of 67-69, whereas alienus of comparable size ranged between 70 and 76. Viewed from the side the propodeal angle tends to be more acute and the declivitous face of the propodeum tends to be longer relative to the dorsal face than in other Lasius s. s. The dorsal margin of the petiole was invariably concave in all series examined; occasionally the concavity is so deep as to be nearly semicircular.

(2) Pilosity and mandibular dentition as in worker.

(5) Fore wings infumated in the inner and upper thirds.

(2) Mandibles of a type intermediate between Lasius pallitarsis and Lasius niger: there is a well marked subapical cleft as in sitkaensis, but it is set more posteriorly than in this primitive species; the basal angle is broadly rounded and the masticatory border lacks denticles, both of which characters are associated with the more advanced niger type.

(3) Frontal suture conspicuous as in queen.

(4) The entire dorsal petiolar margin involved in a deep concavity. In a series from Windsor Forest, Berks, England, secondary lateral convexities are present within this concavity.

(5) Parameres shorter relative to HW than in other members of the subgenus.