This subterranean ant nests under stones or logs and in the soil, occasionally with a small mound, in clay soils, fine, sandy loam, or sandy, well-drained soils with scattered rocks, in open forests and woodlands. It is also common in New England pine barrens (Ellison et al., 2012). Lasius latipes is a temporary social parasite of Lasius americanus, Lasius crypticus, Lasius interjectus and Lasius neoniger. It has also been found nesting together with Formica occulta, Lasius sitiens and Myrmica hamulata (Mackay & Mackay, 2002).

The hairs on the ventral surface of the head of workers are relatively short (0.20 mm or less) and distributed over the entire surface. The hairs on the gaster are also short (0.22 mm or less) and are also scattered over the entire dorsal surface. The apex of the petiole is blunt (when viewed in profile) and convex or straight as seen from the front (rarely slightly concave). (Mackay and Mackay 2002)

Coast to coast in southern Canada and the northern half of the continental United States, with southern extensions to Arizona and New Mexico and to South Carolina and Tennessee. 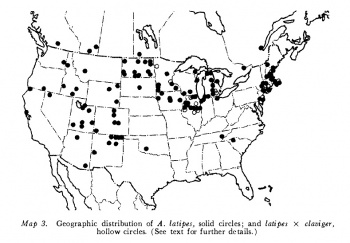 Wing (1968) – Of the 259 samples, 44 had data in some form relating to nest structure and location. Nests in the open numbered 25, those in woods and openings in woods 11, while the status of 8 samples was uncertain. With respect to immediate nest-cover, 19 were under stones, 3 associated with wood, 15 without immediate cover, and 7 of uncertain status. Cole (1954) listed 4 New Mexico records of Lasius latipes as A. coloradensis. The data associated with these nests indicated that they were under stones in open grassy areas with scrub oak, pine, and cedar at 7000 to 7200 feet. He listed 9 records under latipes. Of the 7 samples I have seen, 6 were latipes, and 1 coloradensis. The data associated with these samples that seem to apply to latipes is "Nests for the most part beneath stones on dry and moist, grassy, pine slopes. . . . " M. Talbot kindly sent me the 2 or 3 dozen samples that she collected in southern Michigan. The notes relating to these samples are set forth in her paper of 1963. Most nests were on the margins of fields with scattered oak trees. In many cases there was no externally visible evidence of the nest except at flight time. Some nests had immediate cover in the form of stones, wood, or mounds, the latter occurring in thick growths of grass. Kannowski (1956) discussed the structure of several nests in North Dakota; I have seen 6 of his samples. Most of the nests were in the open, under stones. In my own collecting, most nests have been found under stones either in the open, or clearings in woods, or on the borders of woods. This species is often found in sandy areas.

Annual sexual cycle The seasonal cycle of this species is typical of the other species of the genus except Lasius claviger and Lasius interjectus. It rarely nests near human buildings. The dealate queens disappear soon after nuptial flights cease. The cycle covers a relatively short, well-defined portion of the year.

During June and part of July, many of the nest records of sexual forms are based on immatures. Adult alates appear in nests from mid-July on into September. Most nuptial flights begin in late August and continue in September, with a few taking place in October.

Talbot (1963) cited August 2 as the first date for finding adult alates in nests. During a 10-year period, she observed 11 flights. They occurred in the late afternoon, often following rains. Before flights, workers opened up nests by excavation, but the time of digging out varied greatly from nest to nest. It ranged from a few days to several weeks before flight time. One colony was observed digging out on August 1, 1953, but had no real flight before September 8. However, a small number of males flew from this nest on 6 different occasions in abortive flight attempts. An estimate of the number of alates leaving a nest during a regular flight was made on September 4, 1961: the total was 2500 males and 4500 females.

Ellison et al. (2012) - This species is a temporary social parasite on Lasius americanus and Lasius neoniger. The workers are generalist predators that also feed on honeydew secreted by root-feeding aphids. The enlarged front legs are used to rapidly dig a new nest. A particularly nice collection of L. latipes in the Maine State Collection was found over Labor Day Weekend in 1971, swarming in a cellar drain in Augusta, Maine.

Association with Other Insects

This species is a temporary social parasite of:

It has also been found nesting together with: 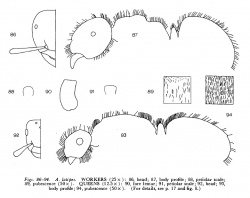 Wing (1968) – Crest of petiolar scale blunt to very blunt, convex or straight, not emarginate. Standing body' hairs numerous, more or less evenly distributed, most of moderate length. Entire surface of gula covered with 20 to 40 standing hairs, the longest of which measure 1.12 mm or more; those on dorsum of gaster measuring 0.13 mm or more. Fore femur with 12 or more standing hairs.

Standing body hairs simple to finely barbulate, usually fairly numerous on basal segment of gaster, varying on dorsum of other segments from sparse to numerous, and either (1) covering entire surface, or (2) confined to rows on posterior edges of tergites, or (3) with an intermediate pattern. Standing hairs present on hind surface of fore femora, both surfaces of middle femora, and front surface of hind femora. Pubescence on head and pronotum dilute to moderate, that on scutum and scutellum dilute, surface shining. Body color varying from blond to reddish or castaneous brown, with a few specimens fairly dark.

Wing (1968) described a number of hybrid forms of this species. 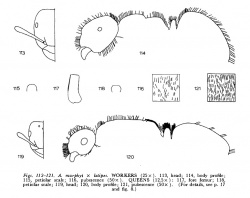 Bears a close resemblance to latipes, from which it is not now separable.

Body pilosity more dense than that of most latipes workers, otherwise no consistent differences have been noted.

Similar to latipes, but differing as follows: Standing body hairs unevenly distributed, bent, tangled, and twisted, but not matted to surface. Crest of petiolar scale more pilose. Gula with most hairs appressed. Antennal scapes and funiculi less clavate. Genual plates of fore femora less pronounced. Fore femora with hairs suberect to erect and mostly flexed, those on other femora fewer in number, mostly appressed to decumbent, and straight. SI over 70. FI 51 or less.

Pubescence on dorsum of gaster dense to moderately dense, elsewhere on body and appendages dilute to moderate. Color brown to yellowish brown.

A typical murphyi male associated with the Idaho collection indicates that this hybrid was produced by the cross, murphyi female × latipes male. 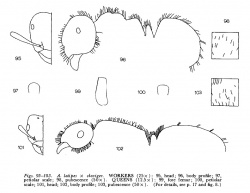 This sporadic form is recorded in a band from Minnesota and Central Illinois east to New England and New Jersey. It is by far the most common of all known hybrid taxa, most of which are known from only one or two collections.

Intermediate between latipes and claviger, but having the general appearance of latipes, from which it is not now reliably separable.

Pubescence on gaster dilute to dense. Petiolar scale variable, but usually quite similar to that of latipes. Standing hairs on gula almost invariably cover the entire surface. Length of standing body hairs and body size average and range a little greater than in latipes. Body color yellow to brownish yellow.

Intermediate between latipes and claviger. Head not or only slightly deformed. Antennal scapes and funiculi decidedly clavate; antepenultimate segment of funiculus greater than 1.55 and less than 2.30 times wider than long. Entire surface of gula covered with from 24 to 40 standing hairs, with maximum length usually less than 0.30 mm. FW 0.50 to 0.75 mm, usually at least 0.55 mm; genual plates of fore femora moderate, not conspicuous. FI 43-54. Crest of petiolar scale usually blunt to very blunt, not emarginate, rarely sharper and feebly emarginate. Scale covered with 50-75 standing hairs. Most standing femoral hairs confined to fore femora.

Pubescence on gaster from very dilute to very dense, that on rest of body usually much less dense, most of body usually shining. Pilosity on gaster variable, but most specimens have standing hairs largely confined to the posterior edges of tergites beyond first. Body color variable, most frequently a medium-dark castaneous brown. Some specimens are lighter yellowish brown, others are a dark grayish brown.

Typical of the males of latipes in all known respects.

When the manuscript of the present revision was nearing completion, I noted that Weber (1935) had reported collecting alpha-latipes queens on September 2, 1931 from Towner, McHenry Co., North Dakota. In this paper on Formica obscuripes, he reported on their collection as follows: "Live workers, males and dealate alpha and beta females of Lasius latipes Walsh were found in digging up an obscuripes nest at a depth of about two feet (61 cm.). They did not seem to be captive and were possibly an independent colony." Upon my request, Dr. Weber sent me a beta queen and 3 "alpha" queens, 1 lacking a head. He was unable to locate the workers and males. The study of these specimens was of particular interest, because I knew of no other alpha queens collected so far outside the known range of claviger. Claviger and coloradensis are so closely related that the previous absence of records of latipes × coloradensis seemed odd, especially since latipes × claviger is our most frequently collected hybrid taxon.

A study of these specimens showed the beta female to be a perfectly typical latipes queen. The three "alpha" females resembled latipes × claviger queens closely enough to pass for small variants of this hybrid. Assignment of these queens to latipes × coloradensis was based both on structural characters, largely metric, and the known ranges of claviger and coloradensis.

Bears a close resemblance to latipes × claviger, from which it cannot readily be separated.

Wing (1968) – Type locality: None stated. Dalla Torre (1893) cited Illinois in addition to Wisconsin (a defective queen described by Mayr, 1866) and New Jersey. Wheeler and McClendon (1903), perhaps in part because of the data in the von Dalla Torre catalogue, stated that Rock Island, Illinois was probably the type locality.

Location of types: None are known to exist despite efforts made to locate the Walsh specimens by the late William Morton Wheeler and others since the turn of the century. For this reason, I am designating a neotype queen. The neotype specimen bears 2 printed labels (Livingston Co., MICH., VIII-25-58, M . Talbot and Edwin S. George Reserve), a written code-label (238Ac-N), and a printed identification label with an added handprinted "NEOTYPE" in red. I wish to thank Dr. Mary Talbot, the collector, for giving me this typical series of latipes; it contains all 3 castes which are consistent with Walsh's descriptions. It is virtually certain that Walsh's specimens came from one of the midwestern states, although the exact locality remains in doubt. Dr. Talbot's collection made in southern Michigan almost certainly originates from the general area where the Walsh types were taken. I am depositing the neotype in the Museum of Comparative Zoology along with another queen, 2 males and 4 workers from the nest series.