A widespread European species that forms supercolonies and has been spread through human activity. It can be a pest species, entering buildings, disrupting soil in gardens and roadworks and damaging power supplies with its nest construction. Colonies in natural habitats are polygynous but monogynous, has a true nuptial flight and have workers that are aggressive toward conspecific workers from other nests. Supercolonies are only found in the non-native range of this species. The native range of L. neglectus is Central Asia (particularly, Uzbekistan) (Stukalyuk et al., 2020). Pashaei Rad et al. (2018) found this species in Iran on the ground in a moist forest.

Worker: This species belongs in a group of Lasius that lack erect hairs on the scapes and on the extensor profile of hind tibiae. Mandibular dentition is reduced (seven denticles; rarely eight) as compared with Lasius lasioides, Lasius alienus, Lasius psammophilus, Lasius paralienus or Lasius piliferus although this is a difference of statistical character.

Queen: Immediately recognizable among the European Lasius by its comparatively reduced size and proportionately smaller gaster, as compared with the thorax.

Male: The smallest male within the European Lasius (s.str.) species.

Lasius neglectus is widespread from Canary Islands to Central Asia, inhabiting almost exclusively anthropogenic habitats (cities, towns, villages). Stukalyuk et al. (2020) found numerous populations of this species in Uzbekistan, where it lives in the natural habitats throughout the country except for arid zones — the Kyzylkum desert and the Ustyurt plateau. It inhabits mesophytic, moderately humidified biotopes at altitudes from 91 to 1982m a.s.l., but is also common in urban areas.

The scarce data noted below probably do not reflect the variation to be found between populations as northern as that from Warsaw (Poland) and those from Iran. As compared with other Lasius species, the sexuals appear earlier in the year: as early as March, within heated buildings in Budapest (Andrásfalvy, in litt.). In three studied populations from NE Spain, activity throughout the year shows remarkably similar duration, beginning in early March until late November, when certain colonies in protected zones are still active.

In two Spanish populations the ants remain active for 24 h/day from May to late September, with temperature controlling the daily cycle.

This ant seems to be highly dependent on aphid honeydew. In North-east Spain, during the early season, when leaves are still lacking on deciduous trees or tree aphids are scarce, this ant constructs earth tents over small herbs protecting stem and root aphids. In the full season ants visit aphids on different tree species in huge numbers and in rare instances individuals are seen carrying small prey (collembola, psocoptera). Ants are active throughout the entire day and aphid tending lasts for 24 h/day, from late April to late October, imposing a non-negligible cost on the energetic budget of individual trees. Preliminary quantitative measures indicate that ants can extract a mean of 250 cc honeydew per month on holm oak (Quercus ilex) and as much as 950 cc honeydew per month on poplar trees (Populus nigra). In a recent study (Paris & Espadaler 2009) food collection performed by the invasive ant Lasius neglectus and by the native ant Lasius grandis was compared. The invasive ant collected 2.09 kg of honeydew per tree while the native ant collected 0.82 kg. The aphid Lachnus roboris was visited by both ant species. In holm oaks colonized by L. neglectus, aphid abundance tended to increase and its honeydew production increased twofold. The percentage of untended aphids was lower in holm trees occupied by L. neglectus. Tending ants may also prey on insects: the native ant workers carried more insects than the invasive ant. Both ant species preyed mainly on Psocoptera and the rarely tended aphid, Hoplocallis picta. We conclude that the higher honeydew collection achieved by L. neglectus was the consequence of (1) its greater abundance, which enabled this ant to tend more Lachnus roboris and (2) its greater level of attention towards promoting an increase of honeydew production. Tree species occupied in Spain.

Lasius neglectus can recruit to food finds en masse. Frizzi et al. (2018) studied the mechanisms and nuances of recruitment in this species, including examining how individuals and groups respond to and potentially choose optimal food resources. They found L. neglectus can rapidly detect the most profitable resource and quickly recruit large numbers of conspecifics. Trail marking intensity decreased far less over time when compared to that of Lasius niger. This trait makes the behaviour of L. neglectus similar to that of other invasive species, such as the Pharaoh ant Monomorium pharaonis.

Nuptial flight seems to be absent. In a single instance alate males and queens were found in a spider net on a house wall (Seifert 2000: 178), although this is not a definite proof of flying behaviour. Except for this case, sexuals have never been detected flying out of the nest. Intranidal mating, thus, is probably the rule (Van Loon et al. 1990; Espadaler & Rey 2001).

Depending on the populations, colonies are very difficult to delimit as they may coalesce and integrate a supercolony occupying continuous areas, as large as 17 ha. In urban areas the colonies are considerably split and may ocupy a single tree and up to 3600 ha. Finding many dealate queens (polygyny) in a nest is a key diagnostic characteristic of this species, the single polygynous European Lasius (s.str.). This biological aspect is very probably the best way to identify it, although it is advisable to verify with the morphology. The number of queens depends on colony size. Queen number, estimated by queens found under stones, is about 35500 in the supercolony of Seva. Using soil cores, worker number for that population in May 2002, was estimated as 1.12 x 108 (Espadaler et al. 2004). The species merits the qualification of unicolonial.

Internest and interpopulation relationships show the usual trait already known for unicolonial ants: a reduced level of agressiveness, though some non-native populations show higher levels of aggression in lab tests. Laboratory tests on aggression should be refined to be fully applicable to this light-avoiding ant. Have a look at its less than stressful tactics and compare with the much more aggressive Argentine ant.

Lasius neglectus is highly aggressive against three native Iberian Lasius species (Lasius grandis, Lasius emarginatus and Lasius cinereus), expressed as a higher attack rate of L. neglectus and behavioural dominance throughout the aggressive encounters. Attacks of L. neglectus were performed fastest and most frequent against L. grandis, and also the highest antennation frequencies were observed in encounters between these two species. This could be due to the largest difference in body size, or due to a greater overlap in ecological niche between L. neglectus and L. grandis com­pared to the other two native species (Cremer et al. 2006).

The areas occupied furnish a wide array of possible nesting sites: under stones, temporal refuges with aphids at the base of herbs, amid rubbish.

The expansion process of a supercolony in Spain seems to be much helped by the progresive urbanization of lots. This development usually implies the cutting and burning of all natural vegetation but trees. The planting of grass and continuous irrigation of grass that follows favours the establishment of the ants. See also a map showing the area of the Debrecen supercolony (data from 1998, 2000, and 2002). The presence of different ant species' nest entrances was mapped. The expansion of L. neglectus was variable in space and time. It seems that L. neglectus spreads fastest on paths, and does not spread rapidly in shady and cool areas occupied by coniferous bushes. The data suggest that the relative Lasius niger is more impacted by the invasion of L. neglectus than Tetramorium cf. caespitum. Moreover, Liometopum microcephalumand Lasius fuliginosus were able to defend their territory (Tartally 2006).

A recent experimental research by Ugelvig & Cremer (2007), using L. neglectus from four populations (Bellaterra, Jena, Seva, Volterra) is the first demonstration of contact immunity in social Hymenoptera. Social contact with individual workers that were exposed to a fungal parasite (Metarhizium anisopliae var. anisopliae) provided a clear survival benefit to non-treated ants, upon later contact with the same parasite. Behaviour was also affected: brood care was absent in infested ants whereas naive nestmates increased brood-care activities. The collective behavioural and physiological prophyllaxis work to promote the immunity of the society and to counteract the high risk of disease transmission.

Effects on other ants and arthropods in human-influenced habitats

Through their geographical distribution, the distinct populations live in a wide range of conditions, from strictly urban habitats - streets with heavy traffic to semi-urban sites, mildly degraded habitats or seemingly undisturbed localities. A common feature to all such places is the presence of trees, on whose aphid populations the ants depend.

Some of those populations have attained pest status, affecting man or other biological components. Those populations can properly be qualified as invasive (=an agent of change, threatening native biological diversity). Other populations are still merely established and seem to have a more limited expansion as they have yet to be reported as pernicious; this may correspond to the lag phase found in many invaders. Perhaps this is only due to lack of knowledge or, alternatively, climate has, indeed, a limiting effect on the dispersal or expansion processes.

From its description, it is known that in the areas occupied by this species, other surface-foraging ant species have vanished or have very reduced populations. Spatial and temporal foraging of native ants and their richness on trees is strongly diminished when L. neglectus is present (Paris & Espadaler, 2012). Other arthropod groups also seem to be affected in positive (=enhanced presence; aphids), negative (=lesser density; lepidoptera larvae) or neutral ways.

Bertelsmeier et al. (2015a, b) examined elements of interspecific aggression, and food resource discovery and dominance, between this species and several other highly invasive ants. In laboratory assays Lasius neglectus was highly aggressive when confronted with workers of other invasive ants. Of the group of four species that were found to be aggressive, L. neglectus was found to be fairly adept at finding and recruiting to food in a laboratory arena experiment. 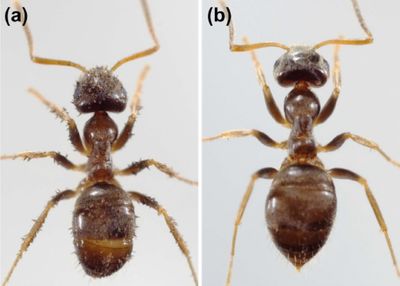 Fig. 1 Infection of the invasive garden ant L. neglectus with the ectoparasitic fungus L. formicarum. Fungal thalli can be seen as bristle-like structures on a infected ants compared to b uninfected ants. The infection intensity of the worker shown is > 200 thalli. Tragust et al 2015.

Not all populations seem to be invasive. In some of these, ants do not invade buildings or houses, and opt to nest outside, in public gardens, at the base of trees or in the cracks in cemented areas or sidewalks.

In certain populations (Seva, Taradell, and Matadepera in Spain, or Paris, in France) ants enter buildings and occupy diverse components of the construction. Killing ants by insecticide spray may produce impressive results. They seem to be attracted to electrical fields, causing failure and damage by shorting or by occupying electrical plugs, connexion boxes or electro-mechanical devices, such as automatic blinds.

Tragust et al. (2015) - Two studied supercolonies of the invasive garden ant L. neglectus, surveyed over multiple years, showed the prevalence of the ectoparasitic fungus L. formicarum increased ca. 14% yearly from low levels until about 80 % of all worker ants were infected. In one of the supercolonies (Gif-sur-Yvette), all but one worker was infected and carried on average >200 thalli.

The species was described in 1990 (Van Loon et al. 1990) although its presence in the garden of the Company for the Development of Fruit and Ornamental Production at Budapest was already known from the early seventies (Andrásfalvy, in litt.). In the morphological description it was compared with Lasius alienus and L. brunneus. Furthermore, it was shown to be allozymatically distinct (Boomsma et al. 1990). Lasius turcicus is the sister species of L. neglectus (Steiner et al. 2004).

Its specific status was temporally not clear-cut (Seifert 1992) although at present this seems to be undisputed.