Some of the type material was collected from a soil sample taken from a small slope of a seasonal water course.

López et al. (1994) - The sample from Mejorada del Campo containing a female was collected by direct excavation while digging a nest of Leptothorax fuentei. The excavation site was on the upper part of the slope of a small dry rivulet. The soil was very moist and covered with a layer of moss. A small ovoidal chamber (length: 6mm, diameter: 2mm) was found under a small root at a depth of 13cm, just 1.5cm under the lower limit of the Leptothorax nest. A small gallery departing from this chamber and directed downwards could be followed for 6mm. The physogastric female, isolated, was found 1 cm below.

Queen physogastry seems to indicate that this colony was collected just at the beginning of the 'egg-laying stage' (Masuko 1990). 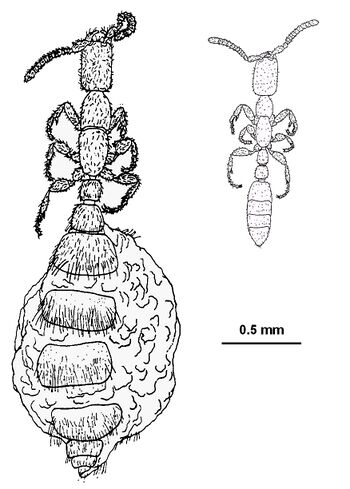 Colour pale yellow, clearer than Leptanilla zaballosi. Legs paler. Margins of alitrunk, petiole, and postpetiole brownish in dorsal and lateral view. Integument feebly striated on the anterior rnargins of pronotum and mesonotum, and ventrally on the alitrunk and petiolar node. Pilosity shorter and more scattered than in L. zaballosi. subdecumbent to decumbent in the antennae and tarsa, and erect to suberect on the rest of the body, more scarce on the alitrunk.

Head elongated, flattened above, wider than alitrunk, with sides rnore parallel than in L. zaballosi. Occiput straight. Tentorium with general morphology as in L. zaballosi but with the following differences: anterior arms U- or V-shaped, tooth-like protuberance less protruding, internal plates with a straight anterior margin. No spots on the head. Clypeus straight, neither notched nor protruding. Mandibles long and narrow, with 4 teeth: a long apical tooth, 2 grouped, not sharp-pointed basal teeth, and a minute, rounded median tooth placed on the inner part of the mandible, besides the basal teeth. Internal side of mandibles with 2 long setae. Morphology of antennae as in L. zaballosi, but with the following differences: scapes swollen, clearly shorter and wider, not reaching the middle of the head. Last funicular segment shorter (as long as the 2 preceding segments together) with a more rounded tip.

Head elongated, flattened above, not wider than the alitrunk, with sides more parallel than in the worker. Occiput straight. Tentorium as in the worker, but with roundish internal plates. No spots on the head. Clypeus with a small central roundish protuberance. It bears 3 long setae ( 1 central and 2 lateral) on its anterior margin, almost reaching the inner side of mandibles. Mandibles falcate, long and narrow, ending in a short masticatory margin without teeth (excluding an apical sharp-pointed tip that could be considered as an apical tooth). Internal side of mandibles with 5-6 long setae. Morphology of antennae as in the worker, but the last funicular segment with a sharp-pointed tip.

Alitrunk elongated, with sides more parallel and more flattened above than in the worker. Prothorax subquadrangular, almost as wide as long, separated by a strong promesonotal furrow from the rest of the alitrunk. Mesepinotum subovoidal, but clearly longer than wide. In lateral view, dorsal margins of pronotum and mesepinotum straight. Hind dorsal margin of propodeum acute. Morphology of legs as in the worker, with clearly swollen femora.

Gaster spherical (physogastric), with granulate surface, due to the ovarian development; far longer and wider than the rest of the body.

Tergite of the first gastral segment subquadrangular, clearly emarginated anteriorly, and widening posteriorly. The other gastral tergites have different shapes but are always more or less rectangular.

The specific name charonea is derived from the latin term charon, charontis, name of the boatman that took the souls of the dead towards the inside of the kingdom of Hades.