Leptanilla japonica nests in small hollows in the soil (Japanese Ant Image Database). Wong and Guérnard (2016) report a single worker of a Leptanilla species identified as Leptanilla sp. cf. japonica from Hong Kong. The specimen was collected in leaf litter using the Winkler extractor method in Lung Fu Shan Park (22°16.823'N, 114°8.270'E, 116m), located on Hong Kong Island on November 25th 2014. CASENT0914941. Photographs of the specimen are available on Antweb.org. While the specimen appears to match the description and characteristics of Leptanilla japonica, we are hesitant to formerly identify it as such due to the important disjunction observed in the distribution of this species. To the best of our knowledge this species has been reported only from Honshu Island in Japan (Antmaps 2015) and it is thus surprising to find it so far south (≥2500km) in the absence of other intermediate records. Future surveys in Asia should reveal if this record represents a valid record of L. japonica or a new cryptic species morphologically similar to the latter.

Ogata et. al. (1995) - The female of this species is unique in having eyes. The male is also characteristic in having hairy eyes, small projections on the parameres and a simple hypopygium which is not bifurcate apically.

Japanese Ant Image Database: Similar to Leptanilla morimotoi but distinguished in having 4 teeth on the mandible (where morimotoi have 3). The second tooth, counting from the apex, is sometimes small, low and obscure.

The following observations are provided by Masuko (1989):

The larvae of the migratory Japanese ant Leptanilla japonica Baroni Urbani have a specialized duct organ on each side of the 4th abdominal segment. Behavioral and histological studies have shown that the adult ants are able to imbibe hemolymph directly from the larval body cavity through these organs, each of which is referred to here as a "larval hemolymph tap." Laboratory observations further confirm that larval hemolymph feeding (LHF) is the sole source of nutrient for the queens. L. japonica is cyclical in its brood production. All larvae in a colony develop in concert, and when they are mature, the queen performs much active LHF on them. Nourished in this way, she achieves full physogastry within a period of only a few days and then lays a batch of 100-200 eggs. LHF thus facilitates synchronization of brood maturation and concentrated production of eggs by the queen. The larval hemolymph tap has probably evolved de novo in Leptanilla, in relation to cyclical brood production by species with small colony populations. Obviously, the function of this larval organ is non-selfish, contributing to overall colony-level functioning. The larvae of Leptanilla are thus properly qualified as a distinct class of caste in ant societies.

This behavior was first noted during observation of the queen of a colony. After briefly but strongly stroking a final-instar larva with her antennae, she held it with her legs and attached her lower mouthparts to its lateral surface. She then maintained oral contact with the lateral body surface while moving the larva with her forelegs, as if searching for some specific spot on its body. During this exploration, the queen frequently nipped the larva lightly with her mandibles, concentrating especially on the thin lateral borders of the abdominal segments. The queen grasped the larva with all three leg pairs, usually lying on her side during this act. Finally, she ceased exploration at the 4th abdominal segment and attached her mouthparts to it for a period of time. During culture of this colony, the queen was never observed to feed on prey, even though the larvae and workers were actively feeding on prey at this time. The frequency of this behavior of the L. japonica queen increased greatly when she became physogastric. Shortly thereafter she laid a batch of about 50 eggs within a period of only 3 days (3 6 April 1982). This colony had a biased composition due to damage caused by field collection; the colony consisted of only 12 larvae and approximately 120 workers. It perished 43 days after the onset of laboratory rearing. Further behavioral details were studied using colony 83-14, which had a more normal composition (1 queen, approx. 130 workers, and 100 larvae). During the 103-day life of this colony, feeding on prey by the queen was never observed, although the ants were provided with 25 prey items (intact geophilomorph centipedes or their chopped bodies), most of which were consumed avidly by larvae and workers. These observations were similar to the larval hemolymph feeding previously discovered by the author in Amblyopone silvestrii (Masuko 1986).

To determine whether the 4th abdominal segment is a region involved in LHF behavior and to analyze the behavioral characteristics of Leptanilla japonica queens, a behavioral time budget was developed for this queen. Her activities were assayed for a total of 745 rain, comprising eight 90-100 min observation periods, conducted from 12 January to 13 March 1983. This period covered both her nonphysogastric and fully physogastric conditions. During these observations, the queen performed a total of 67 acts of "freezing", i.e. the mouthparts were attached to different larval regions for varying lengths of time. On 59 occasions the region involved was recorded; on 51 occasions time spent at that region was accurately measured (Fig. 2). The results show clearly that the 4th abdominal segment is a region of special emphasis for attention activity, in terms of both its frequency and duration. The frequency of attention to the abdominal tip, where the larval hindgut opens, was also high, but the mean durations observed indicate no persistence by the queen in this region (see also Larval duct organs).

Evolution of LHF in Leptanilla.

LHF in Stigmatomma silvestrii has been suggested to be a nutritive adaptation related to the absence of other modes of social food transfer and to the specialized predation on large sporadic prey (centipedes) in this species (Masuko 1986). Only mature or near-mature larvae of the final (5th) instar are employed for LHF by S. silvestrii queens. Since these larvae are present in colonies throughout the active season of the year, through LHF the queen's fecundity can be sustained during unstable food conditions, thus avoiding destruction of the larvae by the only possible alternative, cannibalism. Laboratory and field data strongly suggest that Leptanilla is also a specialized predator of geophilomorph centipedes (Masuko et al., unpublished data). Leptanilla also lacks the habit of oral trophallaxis, and feeding the queens with trophic eggs produced by workers is not possible because due to the absence of ovaries workers cannot produce eggs. Prey is returned to the nest in Stigmatomma by solitary foragers; in contrast, Leptanilla workers are, apparently, obligate group-predators using trail systems, though on a far smaller scale than is known among the army ants (members of the Dorylinae and Ecitoninae). Field data on hunting success are lacking for both Leptanilla and Stigmatomma. Nevertheless, considering the much smaller body size of Leptanilla workers (1.2 mm vs 4-5 mm in Stigmatomma), and that group foraging is supported by a very small worker force (the total observed worker population in L. japonica colonies is only 100-200), it is possible that prey acquisition in Leptanilla is more limited than in Stigmatomma. Furthermore, the nest emigration observed in Leptanilla could be related to local food depletion, which has been invoked to account for the nomadism of army ants (Wilson 1971; Topoff 1984). The selective advantage of LHF previously suggested for Stigmatomma could, therefore, hold also for Leptanilla. Efficient and opportune intranidal distribution of food is especially important in ant species that produce a large amount of brood cyclically and in which brood development is synchronized. Typical of this are Leptanilla, the army ants and some ponerine species belonging to Cerapachys (Holldobler 1982), Simopelta (Gotwald and Brown 1966), and Onychomyrmex (Taylor, cited in Schneirla 1971, p. 167). As previously suggested (Masuko 1987), LHF is an expedient way for the queen to synchronize mass egg-production with the maturation of larvae in her colony. Nothing is known in regard to the nutrition of the queens in army ants (Rettenmeyer 1963; Schneirla 1971; Gotwald 1982). Cannibalism of mature brood, either destructively or in a nondestructive manner like LHF, are likely modes of queen nutrition in these ants. Worker trophic eggs are another potential source of nourishment for the queens, but their production has not been confirmed in army ants.

According to the descriptions of ant larvae by Wheeler and Wheeler (e.g., 1976 and 1984), structures like the duct organs of Leptanilla are not known for dorylines or ecitonines. Hence, I argue the development of duct organs in Leptanilla as a feature related to small colony size. 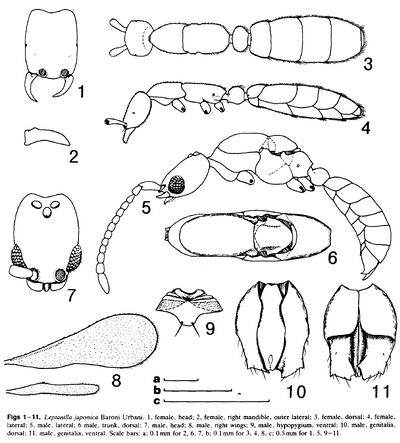