A species discovered during a study of the ant fauna in the Bogor Botanical Garden (Kebun Raya Bogor) in West Java. The structure and function of the mandibular gland of the worker of this species was studied by Billen et al. (1998).

Ito et al. (2001) - This species is similar to Leptanilla butteli from Selangor, Malacca in having only two mandibular teeth (see drawing in description section below). It is, however, easily distinguished from the latter by the presence of anterolateral lobes of clypeus, nearly parallel sides of head, distinctly pedunculate 3rd antennal segment, very narrow suture separating pronotum from the rest of alitrunk, larger postpetiole, etc. 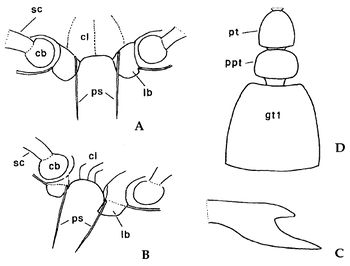 Head in full-face view with almost parallel sides, slightly narrowed at its anteriormost and posteriormost portions, with almost straight posterior margin. Clypeus roundly raised between antennal insertions; the raised portion posteriorly ill defined, and anteriorly truncate; this truncated margin continuing at both sides as carinae sloping down to the level of antennal insertion where clypeus has a pair of lateral lobes. Mandible rather slender, with only two teeth including apical one; upper edge of mandible distinctly carinate and darkened. Scape moderately widened, widest at its mid-length, reaching only mid-length of head measured from posterior margin of antennal insertion to posterior margin of head; 2nd antennal segment longer than wide; 3rd segment with a distinct basal peduncle; 4th to 11th segments wider than long; apical segment approximately twice as long as wide. Pronotum in dorsal view narrower than head, roundly convex laterally, widest at its mid-length; the rest of alitrunk narrower than pronotum, demarcated therefrom by a narrow suture, with rather parallel sides. Alitrunk in profile with almost straight dorsal outline, but pronotum sometimes sloping anteriorly because it is movable at the junction with the rest of alitrunk; mesopleuron not defined posteriorly by any suture. Dorsal and lateral faces of posterior half of alitrunk meeting by a right angle, but the edge not sharply defined by a carina; posterior face of propodeum rather steeply sloping. Petiolar node in dorsal view almost as long as wide, slightly widened posteriorly; postpetiolar node shorter than petiolar node, distinctly wider than long, anteriorly distinctly narrowed. Petiolar node in profile with rather steep anterior and posterior slopes; anteroventral portion of petiole with a low and thin plate; postpetiole slightly smaller than petiole, ventrally with a medium-sized process. First gastral segment with weakly angulated anterolateral corners.