Delsinne et al. (2015) - All the specimens were collected from a single reserve bordering the Podocarpus National Park on the eastern Andean slope of southern Ecuador. The habitat is an evergreen lower montane forest (Homeier et al. 2008) which is in nearly pristine condition. The forest harbours more than 300 tree species, with Lauraceae, Melastomataceae and Rubiaceae being the most species-rich families (Homeier et al. 2012). The mean annual temperature is c. 15 °C and mean annual precipitation is c. 2200 mm, with low seasonality (Bendix et al. 2008). Soils of the sampling area are cambisols, with a very thick (often > 50 cm) leaf litter layer (Homeier et al. 2012). Soil texture is sandy silt loam; proportion of sand, silt and clay is 41%, 52%, and 6%, respectively; mean pH = 3.2 ± 0.1 SD (n = 24 soil samples).

Known only from the type locality.

With the characters typical of the genus (see diagnosis and description in Brandão et al. 1999 and Borowiec & Longino 2011; see here) and of the L. biconstricta species-group (see diagnosis of the group above). Other characters or differences are as follows: Head. Elongate and rectangular with lateral margin nearly straight and parallel. Posterior corner rounded. Posterior margin modestly convex, almost straight. Parafrontal ridge absent. Clypeal lamella strongly convex (Fig. 6C). Masticatory margin of mandible dentate but teeth extremely minute, blunt and irregularly shaped, difficult to discern even under magnifications of about 100× (Fig. 6C). Basal and masticatory margins united by a broad convexity. Basal margin faintly crenulate. Labial palp not readily visible but, at least, one-segmented, maxillary palp two-segmented. Hypostomal anterior border rounded and slightly projected outward but without forming a distinct tooth (Fig. 6A). Scape when laid back reaching about medial distance to posterior margin of head. 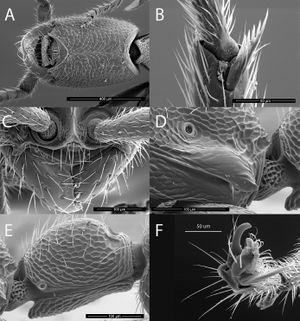 Pilosity and sculpture. Mandible smooth and shiny, with few scattered piligerous punctures. Head with abundant deep piligerous punctures and smooth interspaces on average equaling puncture diameter, except on ventral side and front where punctures are sparser, separated by more than their diameter. Mesosoma and abdomen more finely and sparsely punctate. Fine reticulate sculpture present laterally on lower pronotum, entire mesopleuron, propodeum, and petiole. Body and appendages with abundant, short and subdecumbent to suberect hairs. Body color brownish to reddish, with head and mesosoma tending to be darker than petiole and gaster. Legs and antennae yellowish.

Name in apposition, in honour of the Prometeo initiative of the Ecuadorian government that seeks to strengthen research and knowledge transference by getting national and international experts to work together. This project is aligned to the Ecuadorian “National Development Plan for Good Living”, which has the objective, among others, of guaranteeing the rights of Nature and promoting a healthy and sustainable environment. Furthermore, the species is the largest of the L. biconstricta species-group and its name nicely reminds us of ‘Prometheus’, the Titan in Greek mythology who brought fire, a symbol of enlightenment, to mankind. We hope that this new ant species will symbolize the promise of a bright future for Ecuadorian biodiversity.