Individual workers of this species have been found foraging on the forest floor and through leaf litter. Nests were discovered under the ground and in rotten logs.

A member of the attenuata species group. Rakotonirina and Fisher (2014) - Worker. Third antennal segment of normal length, less than twice of the length of the second; eye breaking outline of sides of head; basal half of mandible finely longitudinally striate, apical portion faintly striate or smooth between sparse punctures; metapleuron finely rugulose; posterior portion and anterodorsal level of mesopleuron finely rugulose or with superficial rugulae; posterodorsal angle of node projecting posteriorly and overhanging its posterior margin.

Leptogenys grandidieri is easily recognized by the combination of the following characters: the striation on mandible, the presence of sculpture on the sides of the mesosoma, and the backward projection of the posterodorsal angle of petiolar node over its posterior margin. This species is very similar to Leptogenys edsoni but in the later the dorsal and posterior faces of petiole meet at a right-angle. Leptogenys manongarivo is similar with respect to the posterior projection of the posterodorsal corner of petiolar node, but L. manongarivo lacks sculpture on the sides of the mesosoma.

The high and mid-elevational montane rainforest in the PN Andohahela in the south-east of Madagascar is the only site where L. grandidieri is known. The species is absent from the dry forest habitats adjacent to these mesic forests in the park. 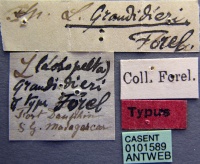