This species inhabits mostly mesic to occasional dry forests of the Amazon watershed, with nests found in rotting logs on the ground (Wheeler 1923).

Key to Leptogenys of the New World

The biology of Leptogenys linearis is poorly known.

The Leptogenys genus page has more details about the general biology of ants in this genus, some of which is summarized in what follows. New World species have relatively small ranges, generally occur in humid forests and prey on isopods. Colonies may occur in high densities on a local scale, with up to 5 or 6 species present. Nest size tends to be small with just 20 or 30 individuals in a mature colony. Nests of most species may be found in rotten wood on the ground, usually within cavities in logs or large branches, and also beneath bark. Wood-soil and rock-soil interfaces are another common nesting location, as well as rock crevices, and a few species may nest directly in the soil. Reproduction is most commonly via ergatoid females and, in many species, may include egg-laying workers. 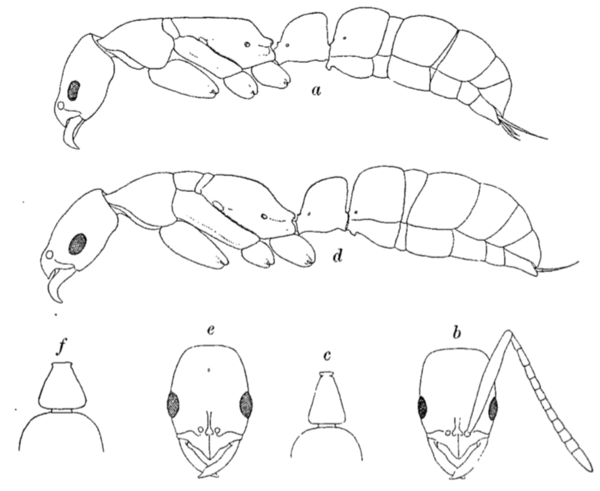 Two worker syntypes and one male syntype in The Natural History Museum. Labelled “Santarem, 54/63.” Acc. Reg.: “1854 no. 63 (11 Oct.). Brazil, Santarem on the Amazon. Purchased from Stevens. Collected by Mr Bates, Alta da Chai, nr Santarem.” The specimens are each mounted with a pin through the thorax to card, the latter having a stout pin run through one end, together with a small rectangle of blue card. On the male the card has “male 165,” the workers just the number “165.”

A futher male syntype, in Oxford University Museum of Natural History, has been remounted in the past by removal of the narrow pin through the thorax, and then gummed flat onto a square of card (back of head damaged). On the upper side of the card is the number “165”, and on the underside is “Braz. Santarem.” Also on the pin are three other labels: a small blue rectangle; “Ponera linearis Smith;” and “Smith Coll. Form. 96.”

Lattke (2011) - The common trend in this genus towards smooth and shining sculpture and loss of pubescence is not reflected in this species. The phylogenetic analysis suggests this species is the sister taxon to the rest of the New World Leptogenys.

Towards the end of this revision I was alerted by Barry Bolton that the worker syntypes of L. linearis were in the The Natural History Museum. Fortunately it was possible to examine a worker and determine without a doubt that it is the senior synonym of L. dasygyna. The following information was supplied by B. Bolton: “The BMNH has three syntypes (2 workers and 1 male). These are each mounted to card by a slender pin through the mesosoma, and the card itself has a stout pin run through one end. Data label has “Santarem, 54/63”, which in the BMNH Accessions Register reads “1854, no. 63 (11 Oct.). Brazil, Santarem on the Amazon. Purchased from Stevens, collected by Mr Bates, Alta de Chai, nr. Santarem.” A blue card rectangle on each pin states “165”. A further syntype male is in UM, Oxford. This has been remounted in the past by removal of the narrow pin through the mesosoma and then gummed flat onto a square of card, with back of head damaged. On the underside of the card is inscribed, “Braz. Santarem”, and on the upper side the number “165”. Also on the pin are three labels, the uppermost of which is a rectangle of blue card (also present on the three BMNH syntypes). The second states “Ponera linearis Smith”, and the third “Smith Coll. Form. 96.” These 4 specimens appear to constitute the entire syntype series.