Leptogenys lohahela is limited to the rainforest of the PN Andohahela in southern Madagascar. It has been collected from leaf litter sampling and pitfall traps. The species forages on the forest floor and nests in rotting tree stumps.

Leptogenys lohahela can be confused with Leptogenys saussurei and Leptogenys acutirostris with respect to the presence of metanotal groove, but the latter species are larger in size, the posterior margin of the petiolar node, in dorsal view, is medially emarginated for L. sausurei, and the posterolateral margin of petiolar node, in profile, is with a blunt angle, not a small sharp tooth for L. acutirostris.

Head more or less rectangular, width not increasing from level of eyes to the front, but slightly decreasing behind level of eye toward posterior border of head. Median lobe of clypeus triangular and prominent, without anterior teeth on each side of median carina; lateral margin not interrupted and sharp. Metanotal groove visible with mesosoma viewed dorsally; in profile, mesopleural sulcus indistinct, but upper portion at level of metathoracic spiracle with wide, shallow impression. In dorsal view, petiolar node longer than broad, posterior margin straight and not medially excised. With head in profile, anterolateral portion from level of eye reticulate-rugose; in full-face view, the dorsum with dense punctures which become shallower and more scattered near posterior cephalic margin. Mandible finely striate, interspersed with piligerous punctures. Dorsum of pronotum distinctly with larger and denser punctures compared to the rest of dorsum of mesosoma. In dorsal view, petiolar node covered with smaller and sparser punctures; in profile, upper half of sides of node densely punctate, superimposed with faint rugulae. 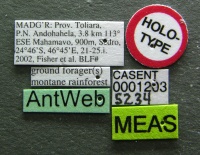