This species is known only from one specimen collected from the dry forest habitat of the PN Tsingy de Bemaraha in western Madagascar. It was found foraging in leaf litter.

Leptogenys namoroka is very similar to Leptogenys tsingy in that they have small eyes, which do not break the lateral border of the head in full-face view, but L. tsingy is smaller in size (WL: 2.17–2.39), has broader petiolar node (DNI: 134–146) and is covered with abundant short suberect hairs and sparse pubescence on the dorsum of the mesosoma, petiolar node and the gaster. 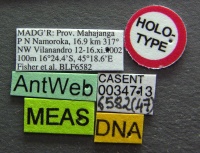