Collected in rainforest and dry forest but its nesting habits are unknown.

The distinctive color pattern that distinguishes Leptomyrmex geniculatus from its two New Caledonian congeners is the combination of dark gaster and dark distal portions of the femora on an otherwise orange body. In some specimens the pronotum may also be dark. Aside from these color differences, this species greatly resembles Leptomyrmex pallens and Leptomyrmex nigriceps. There are scattered records of this species throughout the island, where it has been found in sympatry with L. pallens. This species appears to be less commonly encountered than L. pallens. (Lucky and Ward 2010) 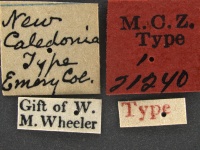