L. nigriventris has been recorded in rainforest, wet sclerophyll and dry sclerophyl. Nests occur under rocks, at tree bases, and in soil.

This is one of the largest Leptomyrmex species, second in size only to its sister species, Leptomyrmex tibialis. Tibial coloration (pale in L. nigriventris; dark in L. tibialis) distinguishes these taxa. Leptomyrmex nigriventris and L. tibialis co-occur in the region of Dorrigo, New South Wales. Large body size (HW 1.49–1.76 mm; WL 4.32–4.98 mm), a broad head (CI 0.66–0.75), 10+ standing hairs on the posterior face of the hind tibia, and a consistent color pattern (orange head and body with a black gaster) will separate this species from all others. No type specimen of L. nigriventris was found; however, the details in the type description and illustration allow unambiguous identification of this species. (Lucky and Ward 2010) 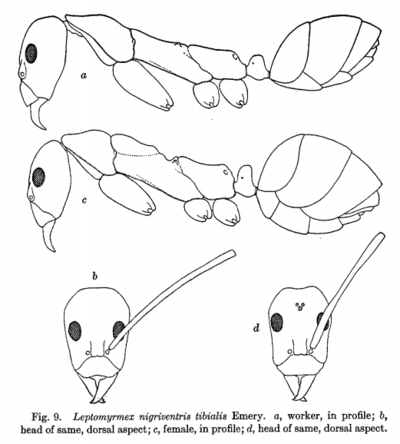 Worker and ergatoid queen of L. nigriventris. From Wheeler 1934.

Pronotum rather short, less than 1.5 times as long as broad. Declivity of propodeum about half the length of the dorsal face, which is slightly concave in profile, and bears a longitudinal impression. Petiolar node high, summit convex and rounded. Posterior face of petiole flat to concave, longer than anterior face ventral surface of petiole, which is flat to feebly convex A distinct longitudinal impression lends a bilobed appearance to the petiole in anterior view. Gaster broad and elliptical. Femora and tibiae somewhat compressed (HTC 0.52–0.66).

Surface subopaque, finely and densely shagreened. Mandibles slightly shining, coarsely punctate along apical margin. Pubescence extremely short and fine, covering the body and appendages. Pilosity on mandibles and clypeus short and yellow. Hairs on venter of gaster and coxae longer and black. Posterior face of hind tibia with ten or more short, brown bristles. Body rufotestaceous throughout, except for black gaster. Head and scapes a deeper, purplish red than remainder of body.

Wheeler (1934) - Head twice as long as broad through the eyes and shaped much like that of erythrocephalus cnemidatus but the mandibles with the blunt tips and masticatory borders very minutely denticulate. Eyes small compared with those of cnemidatus, scarcely longer than the cheeks. Ocelli small, with impressed internal orbits. Antennae long; scapes fully four times as long as broad; first funicular joint longer than broad, second twice as long as broad; joints 3-6 much longer and each distinctly bent near its distal end. Thorax shaped as in cnemidatus. Petiole like that of the worker, with the node subrectangular in profile. Gaster short, elongate-elliptical. Genitalia smaller and more retracted; the stipites small, triangular and pointed; volsellae very slender, pickaxe-shaped, the anterior prong long and acutely pointed, the posterior curved and much shorter; sagittra uncinate. Legs very long; median tibiae bowed; hind femora somewhat angularly bent in the middle; hind tibiae slightly flexuous at their tips. Wings rather small and narrow, only 7 mm. long. Pterostigmal appendage small, pedunculate, sausage-shaped; cubital vein completely absent in both fore wings.

Hairs and pubescence whitish, the former absent, except on the mandibles and external genital valves; pubescence very fine and appressed, rather uniform over the surfaces of the body and appendages.

Yellowish brown; mesonotum with an anteromedian and a pair of lateral darker brown spots; gaster black, base of its first segment yellow; distal two-thirds of middle and hind femora blackish. Wings distinctly and uniformly infuscated; their veins pale yellow, with brown outlines.