Perrichot et al. (2020) - Closely similar to Linguamyrmex vladi, but differs from this species by having a shorter clypeal horn (horn index HoI = 31-34 in L. brevicornis, 56 in L. vladi), with stalk much reduced, slightly broader than long, with the setose pad more hexagonal and aligned with stalk (circular and with a distinct bend between stalk and clypeal pad in L. vladi), and with clypeal pad coated in stout setae. It is also differentiated by the mandibles with two teeth on ventral corner of medioventral blade (teeth absent in L. vladi) and, in workers, with the apical mandibular portion shorter than basal portion (apical portion longer in L. vladi). In addition to the difference in the proportion of the mandible, the female castes of L. brevicornis differ by their size (body length ca. 7 mm in gyne, 4 mm in worker), by the antennae with flagellomeres compact in worker, more elongate in gyne, and by subpetiolar process present in worker.

Known from gynes and workers. 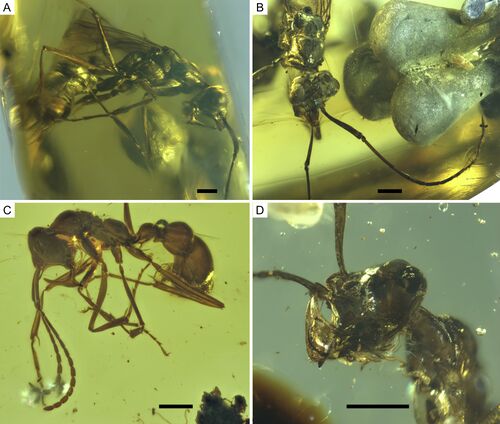 Mesosoma and metasoma as in Linguamyrmex vladi except propodeum higher than long, petiole with subpetiolar process present, and girdling constriction deeper between abdominal segments III and IV (AIII with an oblique posterior surface). Protibia with one large apical spur (calcar) and two short stout setae; mesotibia with two simple spurs and three conspicuous setae positioned along anterior margin of tibial apex; metatibia with one pectinate and one simple spur, additionally with a brush of 8-10 setae flanking the pectinate spur. Sparse, erect setae positioned on dorsum of pronotum, propodeum, petiolar tergite, and first and second gastral tergites and sternites. Pygidium not preserved.