Species of Lioponera are predators of other ants, like most other Dorylinae (Borowiec 2016). At least one species in Australia exhibits a preference in preying on Pheidole (Hölldobler, 1982), and in Japan one species seems to prey on Monomorium (Idogawa & Dobata, 2018). In New Caledonia, Wilson (1957) observed Lioponera cohici raiding colonies of a species of Pheidole, while he found remains of an undetermined species of Lordomyrma in a nest of Lioponera dumbletoni (Ramage et al, 2019).

Borowiec (2016) - Worker The workers of Lioponera are distinguishable using the combination of a unique cuticular flange present on the posterior edge of the hind coxa, just posterior to the femur attachment, at least the anterior half of the petiole being dorsolaterally marginate, and a peculiar development of the metatibial gland that forms an open slit in the cuticle. The coxal flange should not to be confused with the elevated faces of coxa that can be conspicuous when there is a deep trench leading to the articulation with the femur, as can be sometimes seen in e.g. Simopone. The coxal flange and metatibial gland have been reduced in a handful of Australasian species, but in these the dorsolateral carinae of petiole and (usually) also postpetiole and mesosoma, are prominent. The dorsolateral margination of the body is characteristic and in most species very conspicuous on the abdominal segments II (petiole) and III. In a few species the margination extends from the head to the abdominal segment IV. The only other genera that can possess somewhat similar dorsolateral carinae on the petiole are Acanthostichus, Cerapachys, and Cylindromyrmex. The workers of those groups, however, do not possess a coxal flange.

Male The males of the many species of Lioponera are variable. Several characteristics can point to the affinity with this genus: antennae are 13-segmented, costal vein (C) is always absent from the fore wing, a ‘free stigmal vein’ (2r-rs&Rs·f4–5) is present and R·f3 and Rs·f2–3 are always absent. Cross-vein 2rs-m is usually absent but its traces can be rarely seen as a weak spectral vein arising close to 2r-rs. There is a constriction between abdominal segments III and IV but no succeeding segments and the middle tibiae are armed with a single spur. The notauli are present or absent, pretarsal claws are unarmed, and the palp formula is either 4,3 or 3,2. Compare diagnoses of the genera where a free stigmal vein is also found (Eburopone, Ooceraea, Syscia, Tanipone). Eburopone can be distinguished by costal (C) vein always present in the fore wing, Ooceraea and Syscia have 12- or 11-segmented antennae, and Tanipone has very long, 6-segmented maxillary palps that are extruded in mounted specimens and reach the occipital foramen.

This is the most species-rich lineage outside the true army ants, distributed throughout the Old World, from Africa to Oceania, with a major radiation in Australia.

The means of nest-founding of cerapachyines is unknown. In southwestern Australia, Clark (1923, 1924) found solitary individuals of Lioponera angustata and Lioponera constricta under a stone and a log respectively, and thought that the latter, at least, was founding a nest. However, it is not even certain that these specimens were reproductives, let alone founding queens, since no brood was found with either one, and both are “ergatoid” (i.e., possibly worker) in form.

Borowiec (2016) - Members of this lineage have been observed both in the field and in the laboratory (Brown 1975, Clark, 1924a and 1924b, Hölldobler 1982, Wilson 1958). As with most other dorylines, they are predators of other ants and a variety of prey species have been reported. Hölldobler (1982) studied an Australian Lioponera species near turneri under laboratory conditions. He showed that scouts recruit nestmates to raids via a pheromone trail, the species exhibited a preference for Pheidole when presented with a variety of other ants, and that the brood of the prey was paralyzed by stinging and stored alive for up to two months. Brood production is apparently not synchronized, at least in some species. Clark (1924a, 1924b) observed the Australian species Lioponera clarki and Lioponera punctatissima foraging singly around its nest but did not mention any prey; he reported that the workers were peculiar in holding their abdomens over the mesosoma when foraging in both species. Some Australian species are said to be crepuscular foragers, active in either morning or evening, while others are capable of raiding during the hottest parts of the day (Clark 1924b).

Lioponera nests are found in a variety of microhabitats, including soil, under stones, in rotting logs or arboreally in hollow twigs (Wilson 1958, Brown 1975).

Ito et al. (2108) found Lioponera suscitata had non-phasic reproduction: queens laid eggs continuously and all developmental stages of brood were present in a colony. Wilson (1958) and Idogawa and Dobata (2018) also reported such brood composition in Lioponera cohici, Lioponera dumbletoni, and Lioponera daikoku. Hölldobler (1982) did not provide details on the reproductive cycle of Lioponera. cf. turneri. He did however report that several eggs were found with large larvae in captive colonies, indicating this species also shows non-phasic reproduction. This continuous reproduction contrasts with the phasic reproduction (Buschinger et al. 1989; Masuko 2006, Ravary & Jaisson 2002; Wilson 1958) found in other genera of non-army ant dorylines such as Ooceraea, Parasyscia, Syscia and Zasphinctus. Egglaying by a queen in these genera occurs during a limited period and ceases when a cohort of synchronized, developing larvae are present.

Fieldwork in Madagascar has shown that Lioponera queens are brachypterous in most species (C. Peeters & B.L. Fisher, unpublished). This contrasts with the winged queens of Lioponera daikoku and Lioponera suscitata in SE Asia (Idogawa & Dobata 2018; Ito et al. 2018). 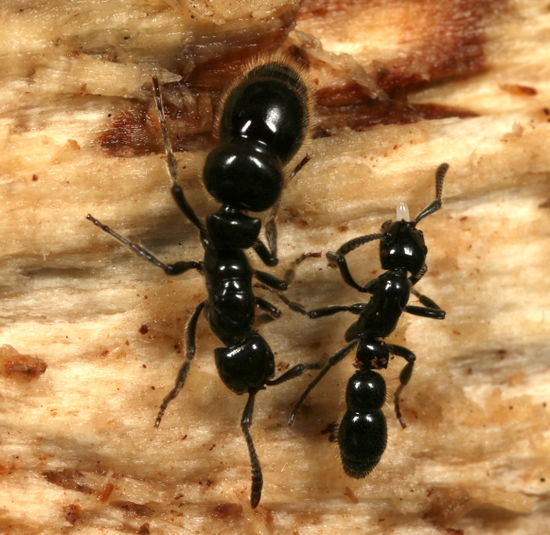 Lioponera is part of a well-supported Old World clade where the intergeneric relationships are known (Brady et al. 2014, Borowiec, in prep.). Within this clade, Lioponera branches off first and is sister to the (Lividopone (Parasyscia plus Zasphinctus) clade. A phylogeny of the relatively few species that have been sequenced suggests that the genus may have originated in Africa and later spread to the Indomalayan and Australasian regions.

Borowiec (2016) - Larvae of Lioponera have been described by Wheeler and Wheeler (1964a). Cocoons are present.