This species has small colonies, averaging slightly more than 10 workers.

Idogawa and Dobata (2018) examined colony attributes and feeding behavior in Kyoto Prefecture, Japan. The study site was a thicket consisting mostly of deciduous broad-leaved trees located in the northern suburbs of Kyoto, Japan (35°03’33” N, 135°47’01” E, alt. 90 m). We collected L. daikoku and other ant species nesting in the cavities of dead bamboo stems during field studies conducted between 5 May and 27 November 2017.

Colony composition: Twenty-three colonies of L. daikoku were collected. The mean colony size was 12.74 ± 12.60 workers (mean ± SD, n = 23), ranging from 1 (a founding queen) to 44. Of the 23 colonies, 19 (82.6%) had a single queen (monogynous), 3 (13.0%) had multiple queens (polygynous), and 1 (4.3%) had no queen. Immatures at different stages coexisted in the colonies. Alates of both sexes were first observed in the two colonies collected on 16 May, and sexuals were continuously collected until 30 September when the last L. daikoku colonies were collected. The largest number of sexuals (48) was found in colony 6. The population size of colonies producing sexuals ranged from 5 to 44 workers. The proportion of males to the total number of sexuals ranged from 0 to 0.65, with a mean value of 0.30. Solitary queens (presumably at the founding stage as these colonies did not contain any brood) were found on 27 May, 3 June, and 2 July. These queens also nested in cavities in bamboo stems.

Nesting and food habits: Six ant species were found inside bamboo cavities at the study site: Monomorium triviale (32 nests), Camponotus yamaokai (22 nests), Temnothorax spp. (20 nests), Crematogaster teranishii (9 nests), Dolichoderus sibiricus (3 nests) and Monomorium intrudens (1 nest), together with six L. daikoku colonies. The first three species occupied the majority of nests (74/87 = 85%). Throughout the field study, larvae and pupae of unidentified species of Monomorium were found in the nests of L. daikoku. These immatures likely belonged to M. intrudens and M. triviale because these Monomorium occur at the study site. Feeding experiments conducted in the laboratory revealed that the workers of L. daikoku stung the larvae of M. intrudens and M. triviale and carried them back to their nests. 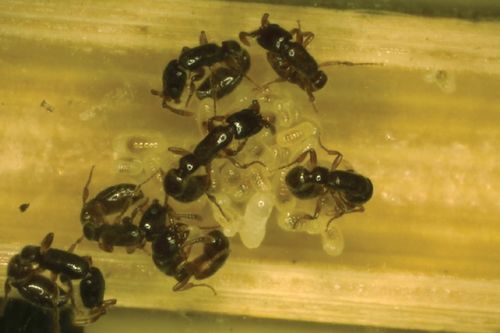 Idogawa and Dobata (2018). Figure. 6. Foraging behavior of L. daikoku workers in the laboratory.

The small colony size of L. daikoku of about 10 on average is the smallest among previous single-nest records of colony size of Lioponera species (ranging from a few dozen to several hundred, Clark 1924; Wilson 1958). Monogyny was the dominant social structure of L. daikoku. However, three of 23 colonies had more than one dealate queen, whose reproductive status was unknown. One of them, collected on 25 July 2017 (Colony 16), had five dealate queens and many brood, despite the lack of workers. Although these queens were not dissected, this hints at pleometrotic colony foundation. Clark (1924) and Hölldobler (1982) reported polygynous nests in other species of Lioponera, suggesting the existence of within-and between-species diversity of social structure. Synchronization of brood production was not observed in L. daikoku, indicating that this species is non-phasic (see also Ito et al. 2018). Our study suggests that the mating flight occurs in May, and involves alate sexuals that emerged the previous August. Solitary dealate queens were found in the field, suggesting that L. daikoku employs independent colony founding.

We observed in the laboratory that adult workers of Monomorium were stung and killed by L. daikoku but were not consumed, suggesting that L. daikoku preys exclusively on brood. At the study site, Monomorium is the only genus with an adult body size smaller than L. daikoku, which might explain the preference for Monomorium. There were two Monomorium species at the study site, and we postulate that M. triviale is the dominant prey of L. daikoku due to its relative abundance and smaller colony size. We did not observe the foraging behavior of L. daikoku in the field. T. Satoh (pers. comm.) observed several L. daikoku workers in a queue on a tree branch, seemingly engaged in group foraging. Some studies of other Lioponera species reported group foraging (reviewed in Borowiec 2016). Interestingly, the number of fresh brood items in the nests of L. daikoku seemed to far exceed the capacity of the workers to carry them. In Thailand, R .Mizuno (pers. comm.) observed that a colony of Cerapachys sp. moved into the abandoned nests of prey ant species, possibly to predate on the remaining brood.

The males of Lioponera are characterized by (1) antennae with 13 segments, (2) the absence of a costal vein on the forewing, and (3) the presence of a free stigmal vein on the forewing (Borowiec, 2016). All of these characteris-tics were shared with the males of L. daikoku. As in other Lioponera species, L. daikoku also had edentate mandibles, a single spur on the middle tibia, and a large brown pterostigma on the forewing. Most of the body was black, while the mandibles, antennae, and legs were yellowish brown. The veins on the wings were very pale. Although the male of L. daikoku resembles that of Lioponera longitarsus, the type species of this genus, the former is characterized by a V-shaped groove (=notaulus) on the mesoscutum, and black body color.

One of the seven deities of good fortune in the old tale of Japan.