Boudinot et al. (2013) - Megalomyrmex foreli can be baited with tuna (Brandão 2003) and Keebler Pecan Sandies and has been observed collecting small worms, consuming large insects, and tending Margarodidae in the field (Longino 2010). Colonies can be large (> 500 individuals), nesting in diffuse soil at the base of trees with an inconspicuous nest entrance (RMMA pers. obs.) or small (~100 individuals) nesting in the stems of Calathea spp. (Marantaceae) approximately 1 m above ground (Jones et al. 1991). Pyrroline and pyrrolidine alkaloids have been detected in the venom of M. foreli and are dispensed through the large flattened and weakly spatulate sting (Jones et al. 1991) possibly through oblique gaster-tip dragging.

Longino (2010) - This species occurs in moist to wet forest habitats, in mature and second growth forest. It typically occurs in mountainous regions; in Costa Rica collections are from 100–1200 m elevation. Workers are large, conspicuous ants that may be found foraging on the ground or on low vegetation. They are attracted to extrafloral nectaries and will tend Hemiptera for honeydew.

In Central America, M. foreli is known from Costa Rica, where it is not common. I have collected foreli in the central cordilleras and on the Osa Peninsula. Workers can be found on the ground and low vegetation as diurnal or nocturnal foragers. Males come to lights. On the Osa, I encountered them in the hilly interior areas, and not in coastal areas. Workers can accumulate on sources of extrafloral nectar; I once observed 15 workers together on one Costus inflorescence.

I observed a colony at the El Ceibo site on the Barva Transect in Braulio Carrillo National Park. It was in the understory of mature wet forest at night. I saw active workers on a large liana stem and discovered that there were cavities in the stem. I saw two entrance holes in the liana, with workers visible inside, and another entrance hole in the ground at the side of the liana. The workers were aggressive, readily attacking my fingers when disturbed. One of the upper entrance holes was concealed by a small aroid with basket roots. There was carton construction around the aroid roots, possibly made by the Megalomyrmex. The aroid also covered two large Margarodidae being tended by workers. Penny Gullan identified them as immature females of the subfamily Monophlebinae, probably tribe Llaveiini. 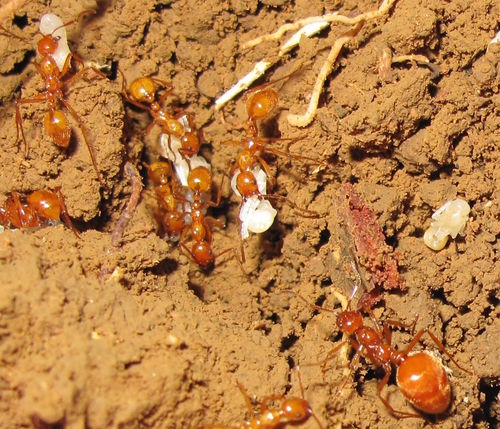 Boudinot et al. (2013) - We consider Megalomyrmex foreli to be a geographically variable species, following Brandão (1990, 2003) and Longino (2010). Variation observed in Central America—predominantly from Costa Rican material—reveals a mosaic of forms which vary in propodeum shape, subpostpetiolar process development, and form of the basipetiolar carina. This latter character varies from sinuate and paired, to arcing and complete. A parallel geographic mosaic of forms is observed in the species of the strictly ergatoid-queen producing Aphaenogaster phalangium complex (Longino & Cover 2004). To our knowledge, ergatoid queens of M. foreli have only been collected in Costa Rica (Peeters 2012) but are assumed to be the only reproductive strategy of the species (Brandão 1990). Importantly, none of the geographic variants of Central American M. foreli have been collected in sympatry. The queen description is based on specimens from Heredia province, Costa Rica.

Among Central American leoninus- and modestus-group species only Megalomyrmex foreli and Megalomyrmex milenae have glabrous compound eyes. This state was observed for M. foreli for all castes. In Costa Rican worker specimens (RMMA110323-01), the sting apparatus lancets were observed to be slightly longer than the sting shaft, broad, with dorsal and ventral margins approximately parallel until weakly spatulate apex. The sting shaft was as long as the lancets and much thinner, coming to a finely rounded point apically.