Ants in the genus Mesostruma are uncommon and form small colonies in soil, usually under or between rocks. They are predacious, foraging primarily on the ground in leaf litter but also occasionally on low vegetation. Roughly half the species have only been collected once. The remainder of the species are not well known either, at least in terms of the number of collections and what is known regarding their biology.

This species is most similar to Mesostruma browni but differs as follows: 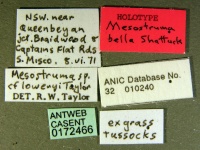