In WA this ant has been collected from bark traps on Wandoo trunks at Dryandra and in litter at Westdale in the eastern Darling Range. (Heterick 2009)

This species is immediately recognisable by the presence of distinct teeth or short spines on the pronotal angles combined with the absence of wing-like projections on the lateral surfaces of the postpetiole. It shares the pronotal teeth with Mesostruma laevigata and is the only species in the genus which lacks postpetiolar wings.

Ants in the genus Mesostruma are uncommon and form small colonies in soil, usually under or between rocks. They are predacious, foraging primarily on the ground in leaf litter but also occasionally on low vegetation. Roughly half the species have only been collected once. The remainder of the species are not well known either, at least in terms of the number of collections and what is known regarding their biology. 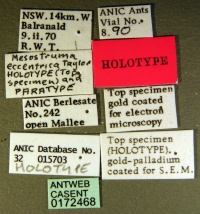