In Central America and the Caribbean Islands this is one of the most common ants found in coastal areas. Wetterer (2017) collected this species on many islands in the Lesser Antilles "through vegetation beating in open areas. Large M. ebeninum colonies often nest in dead branches."

This species is found in Central America, the Caribbean Islands (including the Bahamas), and southern Florida. It has been collected from many of the islands and from Atlantic and Pacific coastlines in many parts of Central America (DuBois 1986). It has been found a few times in the Florida Keys, where it was claimed to have been introduced (Deyrup, Davis & Cover, 2000) but Wetterer (2017) has shown that this species is likely native to this area.

DuBois (1986) - This species presumably nests under stones and in plant cavities. Forel (1899) indicated that M. ebeninum lives in stems and hollow branches. Wheeler (1905a) recorded it from under stones, in cavities of Tillandsia spp., and in dry twigs of buttonwood bushes. Smith (1936b: 832) elaborated further: "This is one of the most common ants of the West Indies... It forms populous colonies which are characterized by having many reproductive queens to a colony. Their great adaptability is indicated by the fact that this species nests in both soil and wood, back of the leaf sheaths or [sic] corn and bananas, in cabbage heads, Tillandsias, and in the fruits of Hibiscus sabdariffa. The workers are exceedingly fond of honeydew. They have been noted attending such insects as Saissetia hemispherica Targ., Coccus viridus Green, the aphid Sipha flava Forbes, etc. The ants are also highly predacious." Wolcott and Martorell (1937) recorded this ant as a predator on the eggs of the sugarcane moth borer, Diatraea saccharalis Fabricius (Lepidoptera: Pyralidae). Although Lavigne (1977) recorded this species from lawns in Puerto Rico, he provided no details on the nest's microhabitat nor structure. Wheeler (1905a) recorded multiple queens per nest (up to 12). Although M. ebeninum has a moderately broad altitudinal tolerance (0-1600 m above sea level), it is most frequently collected in coastal areas. Sexual forms are produced in spring {collections of males: Jamaica: Montego Bay, March 14, 1911; Andros Island (Bahama Islands): Mangrove Cay, May 31, 1904}.

Wolcott (1948) mentions this ant is eaten by the lizards Anolis stratulus and A. cristatellus. Lavigne (1977) collected workers from stomachs of the following two frog species: Eleutherodactylus cochranae and E. coqui.

Vanoye-Eligio et al. (2020) provide the following notes based on collections using Multilure-type traps from northeastern Mexico: Six Monomorium ebeninum workers were collected. Large colonies of this species often nest on dead branches, under stones, and in the cavities of plants.

Wheeler (1908): Common under stones, in Tillandsias and under bark. A number of females taken from a single nest at Arecibo are wingless and subergatoid like those I have described from the Bahamas.

Found a few times in the Florida Keys. Nests may be in the ground or in dead branches or in bromeliads. It is an aggressive scavenger, but does not seem to invade houses in the Bahamas, where it is much commoner than in Florida. Pest status: none. First published Florida record: Deyrup et al. 1988; earlier specimens: 1986. (Deyrup, Davis & Cover, 2000.) 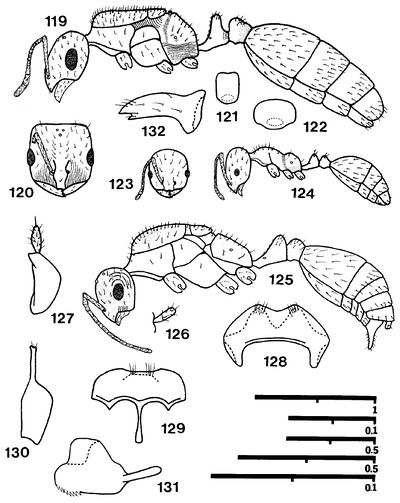 Forel (1891: 165) described the distinguishing characters of this species: "La race de l'Amérique tropicale que j'avais cru devoir rapporter au carbonarium (Ameisen der Antille St. Thomas, 1881) et que j'ai recue dés lors du Guatémala, etc., se distingue nettement par les deux élévations du métanotum, par sa large échancrure méso-métanotale, par la face déclive plus haute du métanotum plus éléve qui forme presque un angle avec la face basal, par le premier noeud du pédicule plus mince et plus longuement pétiolé. Je propose de l'appeler ebeninum." Presumably, the material from Guatemala was provided through Pergande (W. L . Brown, Jr. , pers. comm.); however, none of this material can be discovered in the remains of Pergande's collection. The remainder of this type series is in Geneva (MHNG). A few of these specimens are clearly labelled "TYPUS"; these include the male, both queens, and 6 workers. I assume that Forel regarded these specimens as part of his type series and merely chose to list their localities as "etc." when he described M. ebeninum. I chose the lectotype, designated above, in an effort to restrict the type locality and to reduce future confusion since queens are easier to identify than workers.