The tiny yellow workers of Monomorium exiguum can be found throughout Madagascar but are most abundant in Toliara Province, where they are often among the most commonly collected Monomorium in sifted litter samples (Heterick 2006). Collingwood et al. (2004) found that this species apparently inhabits leaf litter or topsoil. In Yemen it was found nesting under a stone next to a large fig tree and inside the galleries of a termite nest. The soil was dry with ample dry seeds. Another nest series was found in leaf litter next to a date palm tree where the soil was rich in decaying organic material (Sharaf et al., 2017).

Heterick (2006) - A member of the M. exiguum complex in the M. monomorium species group. Based on comparative type material I have seen, Monomorium exiguum is part of a complex that includes, at least, the exclusively African Monomorium mictilis, Monomorium rosae and Monomorium taedium. An 11-segmented antenna, an elongate and flattened head capsule, weakly developed clypeal carinae, a dorsally rather flattened rather than evenly convex propodeum and the low, strongly conical form of the petiole are common to all of these taxa. Monomorium rosae is placed in a different complex by Bolton (1987) on the basis of the appearance of the worker postpetiole, but in actual fact, the shape of the postpetiole in larger, darker specimens of Monomorium exiguum approaches that of M. rosae, if it is not identical. The degree of obliqueness seen in the posterior face of the postpetiole appears to be proportional to the size of the worker, rather than a distinct feature at the species level, let alone the species-complex level, in all three species mentioned above.

Monomorium mictile is separated from M. exiguum by Bolton (1987) on the basis of the presence or absence of erect infrahumeral setae. These are supposedly absent in M. mictile and long and erect in M. exiguum. In fact the setae are present, but short and appressed in M. mictile. This particular character does not seem to be useful as a means of separating similar species in the M. monomorium species group, at least in Madagascar. Where hundreds or even thousands of workers are available for examination, I have noticed variability in the number, length and alignment of the promesonotal setae, including differences in the length and alignment of the infrahumeral setae. This phenomenon may not be recognizable where only a few, isolated specimens are available for study. For now, I would allow for the separation of M. mictile from M. exiguum, as all Malagasy specimens I have seen of the latter have erect or semi-erect infrahumeral setae (albeit of different lengths). The same applies to Monomorium taedium, for which I have seen three paratype workers. Apart from their somewhat larger size (HW = 0.34 mm) and lack of erect infrahumeral setae they look exactly like brown M. exiguum. Interestingly, the postpetiole of the paratype specimens of M. taedium is quite globose, as in smaller M. exiguum.

Interestingly, the paler ‘flavescens’ and ‘bulawayense’ forms also occur in Madagascar, along with M. exiguum sensu stricto. In the taxon faurei the head is darker than the mesosoma, and the gaster is pale with darker infuscation on its basal half, as well as on the sides of the first gastral tergite. This variant, too, is quite common on Madagascar. Monomorium exiguum workers from Madagascar tend to have a slightly more tapered petiolar node than their counterparts on the African mainland.

Aldawood & Sharaf (2011) - The Monomorium dryhimi type (a synonym of M. exiguum) was taken from a nest under a stone on hard-packed soil which contained tens of workers and was found in relatively elevated area of a valley which is high enough to avoid direct impacts of flooding. No additional nests were found despite extensive surveys. In addition, we were not able to collect foraging workers near the nest. It appears that members of the Monomorium monomorium group may prefer inhabiting areas of high elevations. All the four Arabian species were found inhabiting elevated localities with more than 1800 m asl., except Monomorium clavicorne which was also recorded from both relatively lower elevated areas including Riyadh and Al Qatif, in Central and Eastern regions of Saudi Arabia, respectively, and also from a much elevated area, Fayfa, Asir province (Collingwood 1985). Apparently this species is endemic to the chain of Asir Mountains which extends to Yemen.

Bolton (1987) - Without doubt the name exiguum, as presently constituted, conceals more than one valid species, but a very detailed analysis of much more material than is currently available will be necessary to split up the mass. Particularly interesting is the occurrence of both alate and apterous females among some Ghanaian samples. Almost certainly this indicates that two species are present in Ghana and workers associated with the apterous females closely match the type-series of Monomroium flavescens. Unfortunately females from the rest of the range are utterly unknown so no comparisons can be accurately made. The species closest to exiguum as defined here is Monomorium vaguum, but this is easily distinguished by the presence in the latter of a conspicuous clump of 4 or more pairs of hairs on the pronotum.

PETIOLE AND POSTPETIOLE: Petiolar spiracle lateral and situated within anterior sector of petiolar node; node (viewed in profile) conical, vertex tapered; appearance of node shining and smooth throughout; ratio of greatest node breadth (viewed from front) to greatest node width (viewed in profile) about 1:1; anteroventral petiolar process absent or vestigial; ventral petiolar lobe present; height ratio of petiole to postpetiole between 3:2 and 4:3; height–length ratio of postpetiole about 1:1; postpetiole shining and smooth; postpetiolar sternite without anterior lip or carina, or this structure vestigial.

PETIOLE AND POSTPETIOLE: Petiolar spiracle lateral and situated slightly anteriad of petiolar node; node (viewed in profile) cuneate, vertex tapered; appearance of node shining, with vestigial sculpture; ratio of greatest node breadth (viewed from front) to greatest node width (viewed in profile) between 2:1 and 1:1; anteroventral petiolar process present as a thin flange tapering posteriad; height ratio of petiole to postpetiole between 4:3 and 1:1; height–length ratio of postpetiole between 4:3 and 1:1; postpetiole shining and weakly striolate posteriad; postpetiole shining and smooth; postpetiolar sternite without anterior lip or carina, or this structure vestigial (NB. May be confused with rear margin of postpetiolar sternite, which does project as a spur, length of sternite being much reduced).

PETIOLE AND POSTPETIOLE: Petiolar spiracle lateral and situated slightly anteriad of petiolar node; node (viewed in profile) conical, vertex tapered, appearance of node shining and smooth; ratio of greatest node breadth (viewed from front) to greatest node width (viewed in profile) between 4:3 and 1:1; anteroventral petiolar process absent or vestigial; height ratio of petiole to postpetiole between 1:1 and 3:4; height–length ratio of postpetiole between 2:1 and 4:3; postpetiole shining, with vestigial sculpture.

Heterick (2006) - (lectotype here designated), ETHIOPIA: (locality on label now illegible, but given as ‘Südabessinien’ in Bolton 1987).

LECTOTYPE: worker, Ethiopia, Ilg (Musee d'Histoire Naturelle Genève). In view of the variability, particularly in color, that led researchers to erect new ‘varieties’ for this species, a lectotype has been chosen for M. exiguum that fixes the species name for populations with dark, longer-headed specimens that have the characteristics mentioned in the original description. This particular specimen has been glued in the normal way, dorsal surface uppermost. PARALECTOTYPE: worker, same data as lectotype, here designated for a specimen that has been pointed on the same pin as the lectotype and glued on its back. This specimen has been repinned with photocopies of the original labels (MHNG). 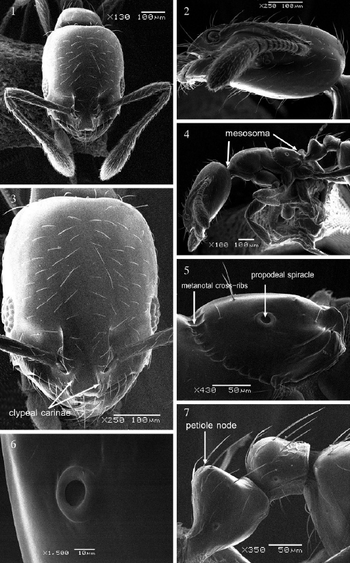