Monomorium floricola is one of the world's most broadly distributed tramp ants. It is widespread in tropical regions of both the Old and New World. Monomorium floricola records are also common in subtropical parts of southern Japan and peninsular Florida. In addition, M. floricola is occasionally found in greenhouses and other heated buildings in temperate areas, primarily in Europe and North America. These temperate records, however, are very few compared with those of its congener Monomorium pharaonis (the pharaoh ant), a tropical ant with indoor records from almost every country in Europe and state in the US. (Wetterer 2010)

A member of the M. boerorum complex in the M. monomorium species group.

Heterick (2006) - Workers of this species bear a striking resemblance in appearance and morphology to dark-headed, bicolored specimens of Monomorium termitobium, but can be distinguished by the combination of a uniformly dark brown or chocolate head and gaster. In M. termitobium the gaster is not uniformly dark brown or black, although it may be a dingy brownish-yellow or yellow with dark infuscation. The petiolar node in all Malagasy specimens of M. floricola that I have seen is also very low and broadly conical to tumular, barely higher than the postpetiole. The ventral surface of the petiole lacks a lobe of any description. Monomorium termitobium workers possess a petiolar node that is distinctly higher than the postpetiole, even when it is low conical in shape, and a subpetiolar lobe of varying degrees is always present.

Bolton (1987) - In the Afrotropical fauna floricola shares a specific character combination of 12-segmented antennae and described eye form with only 5 other species. None of these show the colour pattern of floricola and all have antennal scapes which are relatively shorter, see comparative measurements under Monomorium rotundatum. 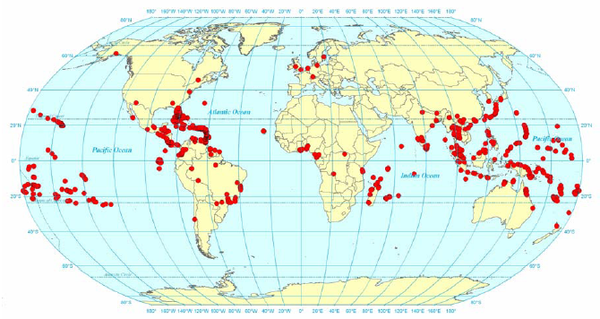 Distribution records of Monomorium floricola as provided by James Wetterer (2010).

Wetterer (2010) - The worldwide spread of M. floricola is in some respects surprising given its biology. The queens of M. floricola are wingless and thus cannot disperse aerially. Instead, new colonies are formed through budding, where a fragment of a large colony separates to found a new colony (Snelling 2005). The tiny M. floricola workers are very slow moving, severely limiting overland dispersal. Other life history characters, however, facilitate dispersal. Colonies of M. floricola are polygynous (with multiple fertile queens), polydomous (workers of one colony may be divided among multiple small nest sites), and can nest in the tiniest cavities. This allows colony fragments that include queens to be readily transported inside floating vegetation (e.g., branches, logs, and coconuts), and more recently inside human transported cargo. 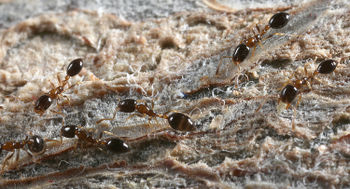 A common species in Florida, occurring as far north as Putnam county. Nests are usually in hollow twigs and branches, or in the dry stems of herbs and grasses. Foraging trails occasionally appear in buildings; these trails usually, but not always, originate from outside. Pest status: may cause minor annoyance when it appears indoors. First published Florida record: Emery 1895; earlier specimens: 1887. (Deyrup, Davis & Cover, 2000.)

Additional images can be found here

PETIOLE AND POSTPETIOLE: Petiolar spiracle lateral and situated within anterior sector of petiolar node; node (viewed in profile) evenly tumular to roundly conical; appearance of node shining and smooth throughout; ratio of greatest node breadth (viewed from front) to greatest node width (viewed in profile) between 1:1 and 3:4; anteroventral petiolar process absent or vestigial; ventral petiolar lobe absent; height ratio of petiole to postpetiole between 4:3 and 1:1; height–length ratio of postpetiole about 1:1; postpetiole shining and smooth; postpetiolar sternite without anterior lip or carina, or this structure vestigial.

Heterick (2006) - HEAD: Head rectangular; vertex weakly concave or planar; frons shining and smooth except for piliferous pits and striolae around antennal sockets, frontal carinae and below the eyes; frons a mixture of well-spaced, distinctly longer erect and semi-erect setae interspersed with shorter setae or setulae, which are decumbent or appressed, longer setae thickest on vertex. Eye elliptical, curvature of inner eye margin may be more pronounced than that of its outer margin; (in full-face view) eyes set at about midpoint of head capsule; (viewed in profile) eyes set around midline of head capsule.

PETIOLE AND POSTPETIOLE: Petiolar spiracle lateroventral and situated within anterior sector of petiolar node; node, in profile conical, vertex rounded; appearance of node shining and smooth; ratio of greatest node breadth to greatest node width about 1:1. Anterior petiolar process absent or vestigial; height ratio of petiole to postpetiole about 1:1; height–length ratio of postpetiole between 3:2 and 4:3; postpetiole shining and smooth; postpetiolar sternite without anterior lip or carina, or this structure vestigial.

PETIOLE AND POSTPETIOLE: Petiolar spiracle lateral and situated within anterior sector of petiolar node. Petiolar node, (viewed in profile) conical, vertex rounded; appearance of node shining and smooth; ratio of greatest node breadth (viewed from front) to greatest node width (viewed in profile) between 4:3 and 1:1. Anterior petiolar process absent or vestigial. Height ratio of petiole to postpetiole between 4:3 and 1:1; height–length ratio of postpetiole between 2:1 and 3:2; postpeti- ole shining and microreticulate.