The most common, abundant and wide ranging Monomorium species in North America.

Since Monomorium minimum queens are winged, they can easily be separated from other species occurring in the same area, most of which have Wingless queens. Only Monomorium viridum queens are winged. Nests of M. viridum appear to be restricted to pure sand while nests of M. minimum only occur in soils containing some clay (W. L. Brown pets. observ.) Workers of this Species can usually be separated by the combination of characters listed in the diagnosis, particularly the smooth and shining mesopleuron.

DuBois (1986) - This species ranges from Pennsylvania and District of Columbia, south to Georgia, west to Texas and New Mexico, and north to Idaho, Montana, and North Dakota. Although this species has been collected in northern Wisconsin and North Dakota, no collections have been made in southern Canada; this species undoubtedly occurs there. In the eastern United States, this species occurs sporadically and is apparently replaced by Monomorium emarginatum in the northeastern states and by Monomorium viridum along the Atlantic coast in New Jersey, Georgia, and Florida. In the southern United States, M. minimum is known from collections in northern Georgia (Athens), Alabama (northern Alabama south to Mobile), Mississippi (only two collections, Amory and State College), and numerous collections in Louisiana and Texas. This species overlaps the range of Monomorium cyaneum in Texas and New Mexico. Monomorium cyaneum apparently prefers drier habitats and usually nests under rocks while M. minimum prefers moisture habitats usually near the edges of woods. Most of my records of M. minimum from Colorado are from the eastern plains. I have only examined one worker which was collected from western Colorado (Mesa Verde National Park). However, Gregg (1963) includes many localities from the mountainous regions of the state (his M. viridum peninsulatum records should be included with his records for M. minimum). The furthest western records for M. minimum are three collections from southern Idaho (Rupert, 6.4 km W of St. Anthony, and Holbrook). These three collections consist of workers only. It is possible these are Monomorium wheelerorum although they appear to be M. minimum workers.

Essentially all habitats, ranging from arid grasslands and shrubs to pinyon-juniper forests to ponderosa pine-riparian sites. It is found most often in open areas. (Mackay and Mackay 2002) 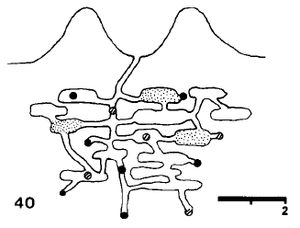 Nests in soil appear to have a characteristic structure; most are shallow (less than 10 cm deep, Kannowski, 1956) with most brood chambers located from just under the soil surface to depths of 5 cm (Wheeler and Wheeler, 1963). Although this description referred to nests in North Dakota, nests in Kansas and Illinois are of a similar internal construction. However, tumuli vary considerably depending upon environmental conditions. In Kansas, most nests are located near edges of woodlands and have tumuli with a typical crater structure. Nests in areas of scant vegetation usually lack conspicuous tumuli, since soil particles are presumably blown away as soon as they are deposited on the surface. Nests in sheltered areas, such as at the base of grass clumps, possess mounds with many crenulations causing the structure to resemble a lump of brain coral.

In addition to the wide environmental tolerance of this species, there is a wide altitudinal tolerance. In Kansas, collection elevations range from 244 m to over 1220 m (pers. observ.) In Colorado, Gregg (1963) found collection elevations to range from 1067 m through 2591 In. Similar elevational extremes were found in Tennessee by Dennis (1938). This species also occurs down to sea level.

Most nests contain multiple queens. For example, Gregg (1944) found that nests near Chicago, Illinois usually contained 12-14 queens and Dennis (1938) found a similar number of queens per nest in Tennessee. Presumably these are functioning queens since most are associated with small, separate piles of eggs and first instar larvae (pers. observ.). Recent preliminary allozyme Studies have demonstrated that several queens produce eggs at the same time in nests near Lawrence, Kansas (pers. observ.). Although it is not known how many queens establish a nest, most nests are probably established by one or two queens since a number of small nests with a small number of offspring and one or two queens are found each autumn in the Lawrence, Kansas, vicinity. Since nuptial flights occur in July in this vicinity, most newly mated queens should have new nests established by autumn.

Production of sexuals occurs in late spring and summer; most nests in Kansas contain larvae which will develop into sexuals by late May. Most sexual adults eclose by mid-July. Nuptual flights have not been observed, although they probably occur, since both males and gynes are winged.

Monomorium minimum is one of two species reported to have inquilines (Monomorium ergatogyna is the other species). Van Pelt and Van Pelt (1972) reported larvae of Microdon baliopterus Loew (Diptera: Syrphidae) from nests of M. minimum in Big Bend National Park, Texas.

DuBois (1986) - None known to exist (Creighton, 1950). Wheeler (1902) stated the probable type locality as Austin, Texas (or vicinity) since Buckley (1867) failed to mention a specific locality. Although a few of Buckley’s specimens remain (Academy of Natural Sciences, Philadelphia and collection of Gustav Mayr, Vienna Museum of Natural History, Vienna, Austria), none could be located that were collected in the provided the basis for his description.

Since two species of Monomorium, Monomorium cyaneum and M. minimum, could occur in the Austin, Texas, vicinity, I designate the following queen Museum of Comparative Zoology as neotype of Monomorium minimum to reduce confusion: Texas. Bastrop Co., Bastrop State Park, June 9, 1954, W. Clayd T-119. Since Buckley failed to mention a specific locality in his original description, I followed Wheeler’s suggestion in designating a neotype from the Austin, Texas, vicinity. This specimen bears a red, handwritten label: Monomorium minimum (Buckley) Neotype M. DuBois 1983. Unless otherwise noted the text for the remainder of this section is reported from the publication that includes the original description. 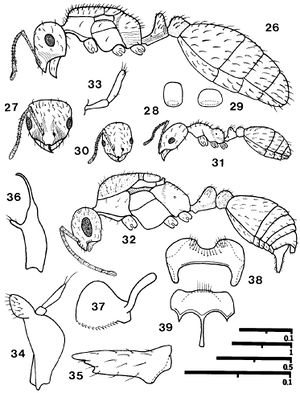