Ranges of three other species (Monomorium emarginatum, Monomorium minimum, and Monomorium trageri) overlap the range of M. viridium. These species can be separated by characters found in the keys and diagnoses. Queens of M. viridium possess a notal furrow on the mesonotum while queens of M. minimum and M. trageri do not. Monomorium viridium queens can be separated from M. emarginatum queens since the metanotum of the latter does not project to the level of the propodeum and scutellum. Additionally, head sculpturing is reduced in M. emarginatum queens. Furthermore, both petiole and postpetiole are emarginate in M. viridum queens.

DuBois (1986) - This species occurs in two allopatric populations along the Atlantic coast: one in the Pine Barrens of New Jersey and the other in Georgia and Florida. In spite of intensive collecting by W. L. Brown, Jr., E. O. Wilson, and others, only one collection has been made in the coastal plain between New Jersey and Georgia (North Carolina. Beaufort Co, Wilmar 1.6 km N, W. L. Brown, Jr., & E. O. Wilson). In many areas, this species is replaced by M. minimum. Apparently this difference is due to microhabitat selection for nest sites by queens of both species. Monomorium viridium prefers sand, while M. minimum prefers clay soils (W L. Brown, Jr. pers. comm). In the New Jersey population of M. viridium, collections range from Lakehurst (Ocean Co.) and Island Heights (Ocean Co.) in the north to Cape May (Cape May Co.) in the south. Further north, M. viridum is replaced by M. emerginatum and M. minimum replaces both species to the west. In the Florida population, collections are common throughout the eastern and central portions of the peninsula from Jacksonville (Duval Co.) in the north to Miami (Dade Co.) in the south. The furthest western records for this species appear to be Sarasota (Sarasota Co.) and Gainesville (Alachua Co). This population apparently ranges as far north as Georgia (W. L. Brown, Jr., pers. comm) Monomorium trageri occurs in portions of northern Florida (Tallahassee and Gainesville) while M. minimum occurs to the north and west of the Florida M. viridum population.

This species is often misidentified hence it reported range, based on misidentified specimens, includes many areas where it does not occur. It may occur in more locations than originally stated by DuBios in 1986. 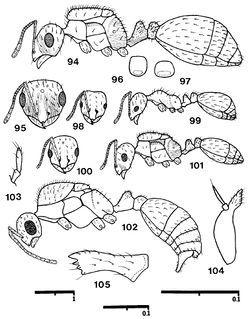 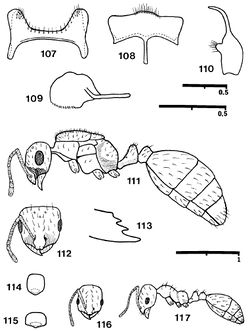 Ergatogyne Head: (representing different localities; N: 2) HL 0.66-0.69 (0.68), HW 0.64—0.74 (0.69), SL 0.50 (0.50), IOD 0.14-0.15 (014), OD 0.05 (0.05), EL 0.15 (0.15), MOD 0.09-0.10 (0.10). Structure—Head as broad as long, CI 97-107 (102), distinctly longer than scape, SIL 72-76 (74); SIW 68-78 (73). In full frontal view, head broadest slightly above eyes; side straight; occiput rounded laterally, summit flat to slightly convex. Eye moderate in size (intermediate between queen and worker). Scape reaching or surpassing occiput by an amount less than length of pedicel. Ocelli present. Mandible, maxillary palp, labial palp, clypeal teeth, and frontal carinae as in queen. Pilosity—Setae erect to decumbent over entire surface of head. Antennal pilosity as in queen. Sculpture—Smooth and shining except as follows: trace of small, longitudinal, parallel rugae extending from lateral margin of clypeus and converging near frontal carinae. Moderate piliferous punctures evenly distributed over entire 0.48-0.49 (0.48), PL 0.30-0.31 (0.30), WL 1.11-1.26 (1.18). Structure—Mesonotum with small pit in place of notal furrow. Scuto-scutellar suture on dorsal 1/3 of alitrunk. Remaining description of alitrunk as in queen except that wings are absent (fusion of sclerites indicate the ergatogynes are wingless). Pilosity—As in queen with many erect to suberect setae on sides of propodeum and mesopleuron. Sculpture—Smooth and shining with many piliferous punctures throughout thorax. Sculpture of propodeum as in queen. Petiole: Dorsum evenly convex to flat. Remaining description as in queen. Postpetiole. Dorsum evenly convex to flat. Remaining description as in queen. Gaster. As in queen. Color: As in queen.