A fungus growing ant that occurs in southeastern Florida and on numerous Caribbean islands.

A member of the Jamaicensis species group. Mycetomoellerius jamaicensis is a unique species in the context of the US American fauna. No other Mycetomoellerius shows the combination of large body size, dark coloration, almost quadrate head shape, antennal scrobes extending to posterior corners of head, long scapes, and four tuberculate longitudinal ridges on the first gastric tergite. (Rabeling et al. 2007)

Mayhé-Nunes & Brandão (2007) - Mycetomoellerius jamaicensis presents noticeable variation in color and several morphological characters. In relation to the typical Jamaican form, specimens from Haiti, Cuba, and Florida are darker and present more slender and a little longer lateral pronotal spines. Specimens from the Bahamas may have, in relation to the other localities, very slender lateral pronotal spines, relatively short projections on the tip of frontal and preocular carinae, as well as smaller second mesonotal projection pair, thinner occipital projections, and longer petioles. Some specimens from Cuba and Puerto Rico also present relatively long petioles. Workers from Cuba and Florida may have two midpronotal teeth, and in the case of some Florida specimens, arising from separate bases. All Florida specimens present mesosomal projections stouter than in other samples and more expanded frontal lobes in relation to specimens from other localities, but agree in all other details with the description we provide above.

In the United States M. jamaicensis occurs only in southeast Florida and the Florida Keys, but it is also widely distributed through much of the Caribbean (see distribution map). Smith (1954) suggested that Mycetomoellerius jamaicensis is a non-native species that was recently introduced from the Caribbean, whereas Deyrup (1994) argues for an early, natural introduction because of morphological differences between the Florida and Caribbean populations. A thorough study of population genetics and morphology would be required to test these hypotheses. (Rabeling et al. 2007)

The first published record of this West Indian species in Florida is Smith 1951. His note says, "introduced?" On the one hand, this is a large conspicuous ant that one might expect to have been found earlier if it had been present. On the other hand, it is only common in a few places in tropical Florida, and it does not seem to occur in heavily disturbed or cultivated areas, either in the Keys or in the Bahamas, so it may have been displaced by the early attempts at agriculture. There is a hypothesis that it may have been affected by spraying for mosquitos (Deyrup et al. 1988). The nests are deep and it is unlikely that they would be in containers of plants. (Deyrup, Davis & Cover, 2000.)

From Rabeling et al. (2007): "Nests usually have several chambers; Weber (1967) found eight chambers in a colony excavated in the Bahamas. Based on partial nest excavations, Wheeler (1905, 1907) estimated that M. jamaicensis colonies contain 150 to several hundred workers. Due to the increasing urbanization of the coastline, Deyrup (1994) considers M. jamaicensis potentially endangered in Florida, which would give M. jamaicensis the distinction of being the first endangered fungus-growing ant species (IUCN 2006)."

Wheeler (1905): This species is common on both Andros and New Providence Islands. On the former it was seen wherever I landed and searched for it - at Big Wood Key, Mangrove Key, and on several of the uncharted keys along the course of the Southern Bight and about Crawl Creek. In New Providence I found it only near Fort Charlotte. It prefers to nest in the pure foraminiferous sand of the seashore at or just above high-water mark. Its nests, which are inconspicuous and are most readily found by tracking foraging workers, are surmounted by a very flat moundlet 1 - 1 1/2 ft. across, with a single somewhat excentric entrance 1/3 - 1/4 in. in diameter. This opening leads down into a chamber about as large as an egg some 8 in. below the surface, and this is apparently connected at a lower level with other similar chambers, which, however, are reached through crevices in the aeolian limestone, and cannot be excavated with the trowel. In one of the superficial chambers I unearthed a poorly developed fungus garden, closely resembling that of Trachymyrmex septentrionalis. Like this species jamaicensis collects buds, small flowers, bits of dead and living leaves, and caterpillar excrement as a substratum for its gardens. When rudely touched the workers fall over and 'feign death.' There are hardly more than 150 ants in a colony. At first I was inclined to believe that the species must be restricted to the sea beaches, but on walking inland about two miles from All Saints' Rectory at Mangrove Key, I found it nesting also in the clearings among the 'coppets,' wherever a small amount of soil in the cavities of the rough limestone has induced locals to plant maize, etc. Here the ants were busily engaged in cutting and collecting bits of green maize leaf, after the manner of the species of Atta sensu stricto. In other places, like Fort Charlotte, N. P., the ants were nesting in the dry, shady 'coppets,' but here, too, they inhabit inaccessible nests in the ubiquitous limestone.

Wheeler and Mann (1914): "This ant forms rather large colonies. At Manneville it was found nesting in dry, sandy soil on the plain near Lake Assuei. Here the insects had thrown up broad, low craters about the nest entrances. In other localities the nests were in more humid situations. In all cases, however, they were in the shade. The ants collect small pieces of leaves, buds and other vegetable substances as a substratum for the fungus which they cultivate, as has been shown by the senior author in a former paper (The Fungus Growing Ants of North America. Bull. Amer. Mus. Nat. Rist., XXII, 1907, p. 760). The workers are diurnal but seem to prefer the late afternoon for foraging. "

Dark ferruginous, with lighter spots on coxae and inferior margin of pronotum; in most specimens, the head and gaster are darker than the rest of the body. Integument opaque and finely granu lose. Pilosity: scarce very short curved hairs confined to body projections, more abundant on antennal scapes and gaster tip. 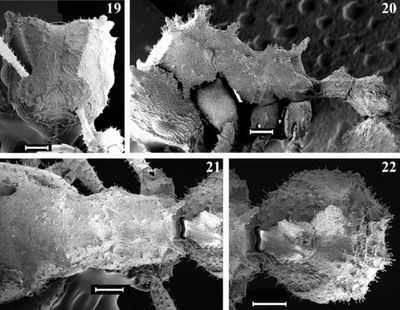 Head, in full face view (Fig. 19), from a little longer than broad to a little broader than long (DCI average 100; 92–117). Outer border of mandible feebly sinuous; eight teeth on chewing border, gradually diminishing in size towards base. Clypeus median apron without conspicuous projections. Frontal area shallowly impressed. Frontal lobe semicircular, moderately approximate to moderately expanded (FLI average 60; 50–67), with faintly crenulated free border, lacking prominent denticles on the antero-lateral border. Frontal carina moderately diverging caudad, reaching the antennal scrobe posterior end in a small tooth at the posterior margin of head; preocular carina posteriorly ending in the posterior margin of head as a stout blunt spine larger than the frontal carinae projections. Occipital spine slender and as long as the preocular carinae projections. Supraocular projection tuberculiform. Paired denticulate vertexal carinae indicated by a series of weakly connected piligerous denticles, flanking the shallowly impressed sagital furrow, which in front joins the transverse impression of frons behind the frontal area. Inferior corner of occiput, in side view, with a small denticulate ridge. Eye convex, weakly surpassing the head lateral border, with 13 facets in a row across the greatest diameter. Antennal scape, when lodged in the scrobe, projecting beyond the tip of the preocular carinae projections by nearly one fourth of its length; gradually thickened towards apex, covered with small piligerous tubercles.

Mesosoma (Figs. 20, 21). Pronotal dorsum marginate in front and on sides; antero-inferior corner with a strong and blunt tooth; inferior margin smooth; pair of median pronotal teeth absent or, when present, very small and arising from a common or separate bases, their tip microtuberculated or acute, not projected above the tip of the stronger lateral pronotal spines, which point obliquely upwards (with the pronotum in frontal view). Anterior pair of mesonotal spines nearly of the same length of the lateral pronotal pojections, with more robust base and upward directed; the second smaller, but much stronger than the almost always absent third pair. Anterior margin of katepisternum smooth, without a projecting tooth. Metanotal constriction impressed. Basal face of propodeum laterally marginated by a row of two denticles on each side; propodeal spines as long as the distance between their inner bases. Hind femora varying from a little shorter to a little longer than mesosoma length.

Waist and gaster (Figs. 20, 22). Dorsum of petiolar node with one pair of truncate teeth, the sides parallel in dorsal view, with a series of lateral denticles; sternum without sagital keel. Postpetiole almost as long as broad in dorsal view, and shallowly impressed dorsally, with straight postero-dorsal border. Gaster, when seen from above, suboval. Tergum I with convex lateral faces separated from the dorsal face by a weak longitudinal row of piligerous tubercles on each side; anterior two thirds of dorsum with three glabrous shallow longitudinal furrows, separated by a pair of rows of piligerous tubercles. Sternum I without an anterior sagital keel.

Named after the island where the types were collected.