This species ranges from Trinidad over the Guianas through the Amazon river valley to the Beni river valley in western Bolivia (Kempf 1964)..

Mycetophylax faunulus is a rain-forest species. Its colonies are small, and the nests are usually found in rotted wood, but also in tangles of epiphytic roots, abandoned termite mounds and in the soil (clay stratum of an Atta mound!). The cavity size is variable, the volume varying approximately between 5-50 cc. The fungus garden is either sessile with lateral attachments to the wall, or pendant. The substrate consists of insect excrements, vegetable debris, seeds, woody fibers; it often includes parts of skeleton of ants (Ponerinae, Cephalotini), presumably used as framework. The bromatia are variable in aspect, their consistency transitional between those of Trachymyrmex and Cyphomyrmex rimosus.

In captivity, M. faunulus specimens rejected dry chemical food such as hemoglobin, blood fibrin, egg albumen, dextrin, gelatin, peptose, maltose, diastase, but accepted bromatia from C. rimosus gardens grown on farine. Workers also lapped up eagerly the body juices of a crushed mosquito. They feign death when disturbed. Among inquilines have been registered a small milliped and an attophilous thysanuran.

Kempf (1964) - The typical bigibbosus is identical with the race later described by Weber as tumulus. It remains here to decide the fate of the other forms hitherto recognized in the tightly knit complex:bigibbosus (of authors, not of Emery) , faunulus and peitiolatus, neatly differentiated in Weber's (1940:413) key. From the material which I was able to gather, I reached the conclusion that they are not separable, but constitute a single species, that takes the oldest available name viz. faunulus. 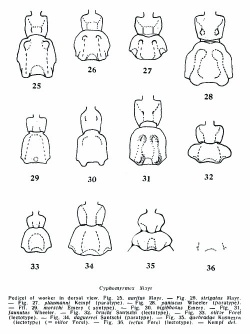 C. faunulus was thought to be a rather small race of what had wrongly been taken as the typical bigibbosus. The type series of the former is indeed on the lower range of the measurements for the species in the presently accepted sense, but this alone is not significant. The additional character given by Weber (1940:413), viz. length-width proportion of the postpetiole (faunulus and petiolatus with the postpetiole broader than long, bigibbosu with the postpetiole as long as broad), likewise does not seem to work. Moreover, petiolatus workers, as Weber (1938:188) himself confesses, " are unsatisfactorily separated from the typical form" (=bigibbosus), the scape character given in his key (1940:413) both contradicts the original description and a syntype specimen. The female of petiolatus, which unfortunately I did not see, is surely more distinct by its broader petiole and postpetiole. However, the evidence is not enough for recognizing a discrete form and I rather place petiolatus into synonymy of faunulus.