This species is only known from reproductives.

See the description section below.

On account of the reticulate-punctate and somewhat shining antennal scrobe, occultus belongs to the olitor-subgroup. The female differs from Mycetophylax olitor and allies in the large eyes; in the relatively large and prominent ocelli; in the long antennal scape that noticeably surpasses the distinctly drawn out occipital lobes; in the markedly angular anterior corner of pronotum, which is also laterally marginate, its laterotergite bearing a large subcircular impression; in the slender, ventrally ecarinate femora, the hind femora not being ventrally angular nor visibly incrassate at basal third; in the elongate petiolar node that bears dorsally a pair of prominent teeth. 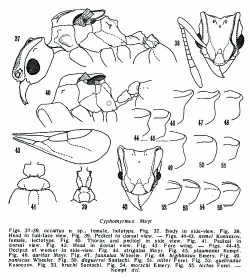 Pedicel (fig 37, 39). Petiole in dorsal view elongate, its anterior corners marked and bluntly dentate; its dorsum posteriorly with a pair of prominent teeth; posterior border without a prominent, thin, transverse laminule. Postpetiole nearly twice as broad as long, subtrapezoidal, longitudinally traversed by two pairs of carinae, the mesial pair sharp, the lateral pair blunt; dorsum deeply impressed between mesial carinae, more shallowly between mesial and lateral carinae. Gaster antero-laterally marginate; tergum I with a median longitudinal furrow, which is rather faint and fades out before reaching the midlength of the segment.

Wings slightly infumated, venation as in the other known species (fig 43).

I have 14 specimens of this caste, but forego a detailed diagnosis at this time. They are at once recognized by their huge eyes and elongate petiole, similar to that of the female.