The bloodred Myrmecia regularis is common in more southerly regions of the SWBP, particularly the karri belt near the south-west coast.

Wheeler (1933 p. 25-29) - M. regularis does not build mounds but nests in rather damp, black earth under logs or large stones in colonies of as many as 100-200 workers. Nocturnal and diurnal foragers, climbing the great trunks of the eucalypts in search of sap and nectar and ruthlessly seizing any small insects encountered on their path. Independent colony foundation is non-claustral.

Queen is brachypterous, i.e. short, non-functional wings are present at adult emergence (Haskins & Haskins 1955). These wings break off before dispersal on foot, and a foundress starts a new colony by non-claustral ICF (see Life History). Brachypterous queens retain unfused flight sclerites in the thorax. The short wings are often broken within hours of emergence, and wing scars give the impression of a queen capable of flying. 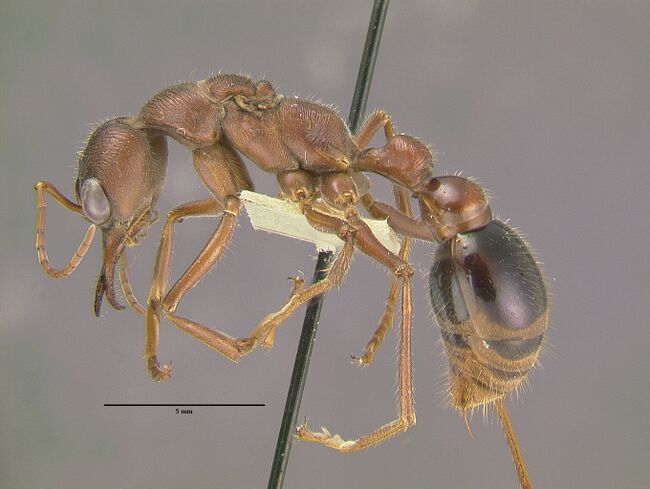 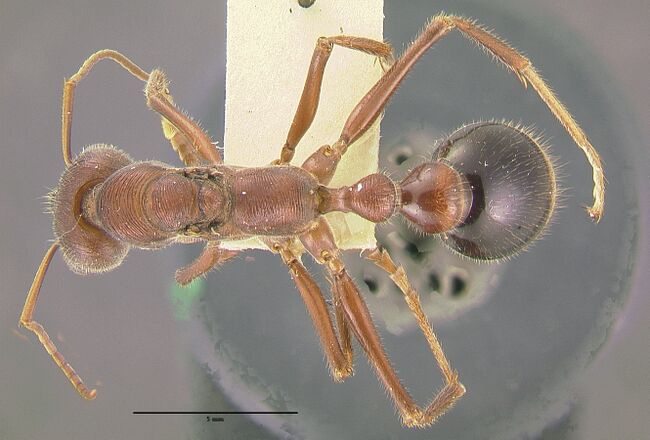 Whole thorax narrower, the pronotum narrower in front; the base of epinotum pointed in front and the angle between the two faces more pronounced. The stalk of the first node is longer and the node more cubic in profile. There is a distinct longitudinal impression down the centre of pronotum and epinotum.

The whole striation of thorax is of this clean-cut description; on the pronotum it is transversely arched and on the rest transverse. The first node is superficially transversely striate and has a few indistinct punctures. The second node and gaster are microscopically reticulate.