A scavenging species found nesting under stones in open areas, including open woodlands.

Rigato (1999) - I believe the main character separating this ant from related forms is the shape of the scape. In almost all of the Myrmecina graminicola specimens examined the scape is somewhat dorsoventrally flattened near the base. If one looks at the scape as in figure (7d) it looks clearly about of the same width at its basal bend as at the apex. whereas in Myrmecina sicula. Myrmecina melonii and Myrmecina atlantis it remains cylindrical and gradually thickens from the base to the apex as in most ants. However, I found few Myrmecina graminicola specimens from Kefalonia (Faraklata env.) with the scape similar to that of the other Mediterranean species; yet in these individuals the body colour is black and not mostly reddish as in the latter. The form described as Myrmecina graminicola var. grouvel/ei Bondroit, and few other specimens, although having a reddish colour. have the scape shape usual for graminicola. Notwithstanding this variation, an overaIl evaluation of spine length, sculpture, colour and scape's shape allows the safe separation of these ants from one another. The pilosity of Myrmecina graminicola is usually more raised and longer than in Myrmecina melonii; however, some specimens from Greece are similar to Myrmecina melonii on this character. The condition of Myrmecina sicula and Myrmecina atlantis seems somewhat intermediate; yet, I have seen few specimens of these species and they often had a partially abraded or poorly preserved pilosity.

Collingwood (1979) - This is a sluggish slow moving species; workers are often found individually in nests of other ant species and on disturbance tend to curl into a tight ball. Colonies occur under stones in stony pastures and in open woodland and may consist of several hundred workers with several queens and often including intermediate forms between worker and queen. This species is mainly scavenging and does not attend aphids. Alatae are developed during late summer and have been taken outside nests from August to October. 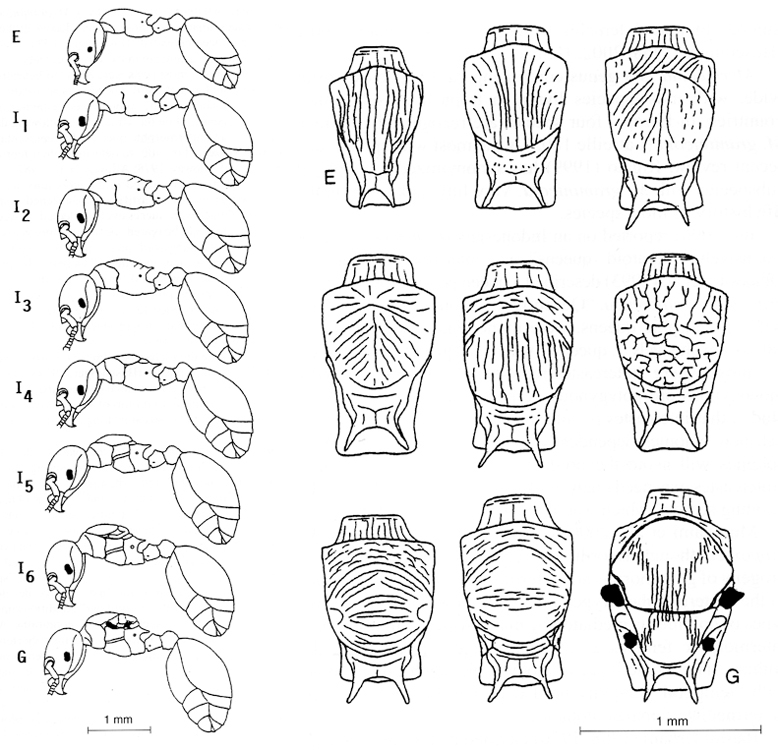 Grasso et al. (2020) found that when disturbed these ants respond with immobility. However, upon perceiving disturbance but under specific inclinations of the substrate, they shift to an active escaping strategy: rolling away. This is a context-dependent behaviour adopted only in appropriate circumstances. During rolling, the ants assume a ball-like shape using antennae and hind legs to obtain an active movement along a stable trajectory. Finally, thet assessed the adaptive value of this strategy measuring its effectiveness in defence against enemies. This is the first example of locomotion by rolling discovered in ants and one of the very few among animals.

The species exhibits a marked queen polymorphism. Females in laboratory mating cages were found to release a pheromone by touching their gaster to the substrate where they are standing, after having moved out of the nest and climbed towards the top of the cage. Mating typically occurred within seconds of pheromone release. The source of the sex pheromone was found to be the poison gland. (Buschinger 2003, 2005)

Since the original paper of Buschinger (2005) on the genetic origin of queen polymorphism in M. graminicola is difficult to access the abstract is reproduced here:

Controlled mating of gynomorphic (gyn/gyn) and intermorphic (gyn/int or int/int) females of Myrmecina graminicola (Latreille, 1802) with gyn- or int-males, respectively, and rearing of their sexual offspring revealed that the genotypes of the parents are decisive of the phenotypes of female progeny. Female sexuals, both gynomorphs and intermorphs, exhibit a kind of sexual calling behavior, the gynomorphs flying only little. Males are attracted by poison gland secretion of the females. Colony foundation success of mated queens was enhanced by adding a few workers from the parental colony, and worker pupae and larvae from other colonies. The first sexual offspring was reared in the colonies in the 2nd to 6th artificial surnmer season. In up to four "summers" always the same phenotype(s) of young queens were produced in a given colony. Gynomorphs (gyn/gyn) mated with a son of a gynomorph (gyn-male) always produced gynomorphs (workers and a few males in addition). Intermorphs mated with a gyn-male either produced both gynomorphs and intermorphs(gyn/gyn and gyn/int, if the queen was a gyn/int heterozygote), or only intermorphs. Since gyn/int-females and int/int-females (both intermorphic) are morphologically indistinguishable, as well as gyn-males and int-males (both identically looking alate males), the putative genotype of intermorphs and int-males had to be idcntified according to the phenotypes of their mothers and later produced sisters in the laboratory-reared parental colonies. The effects of the hypothesized alleles gyn and int are similar to e and E in Harpagoxenus sublaevis and Leptothorax sp-A in that int is dominant in preventing the development of gynomorphs from gyn/int-larvae. This is the third example of a genetically mediated queen polymorphism in an ant species confirmed by crossbreeding experiments, and the first instance in a tribe (Myrmecinini) outside the Formicoxenini. The principle may be involved in other instances of queen polymorphism among ants.

Sculpture well developed (especially the rugulae on the dorsum of head and alitrunk) and usually coarser than in the other West Palaearctic Myrmecina; yet quite variable. Scape nearly always not cylindrical near the base: when seen in dorsal and slightly back view appearing about as wide at the proximal bend, where it is ridged in front, as at the apex. Perpendicular to this view it is somewhat flattened. Anteropropodeal processes developed, often a sharp erect tooth in profile. Colour chiefly dark brown to black: clypeus, sides of the alitrunk, pedicel and II to IV segments of the gaster more or less dark brown or reddish brown. Appendages bright ferrugineous.