Snelling (1976) - Wheeler (1912) noted that craters of this ant were about 6-8 in. in diameter with entrances nearly 0.5 in. across. The nest crater figured by Wheeler (1908:367, Fig. 14) as that of mimicus from Needles, California, probably belongs to this species. Wheeler and Wheeler (1974), studying this ant at Deep Canyon, California, figured two nest craters. They reported 38 samples from the Desert Biome: Larrea-Palo Verde, 12; Cholla-Palo Verde, 25; Agave-Ocotillo, I. The nests which they observed were larger than those noted by Wheeler, the craters 10-16 in. in diameter (but the one in figure 44 does not seem nearly so large) with entrances 1.5-3.0 in. across. Alate females were found in the nests on 1 December.

Participation in a biocenose on Opuntia echinocarpa was observed by Wheeler and Wheeler. Other insects noted to be present were: "... mealybugs, aphids, other ants (Solenopsis xyloni), and braconids [Lysiphlebus testaceus (Cresson)] ..." They further noted workers of this ant at extrafloral nectaries of Euphorbia micromera.

The ant is a diurnal forager, primarily as a scavenger-predator. Considerable quantities of nectar are taken from floral and extrafloral nectaries as well as indirectly through solicitation of mealybugs and aphids. Repletes were found in colonies near Shorty's Well, Death Valley.

Creighton found the species flying after a light rain on 16 Feb. 1963 near Thousand Palms, California.

Snelling (1976) - Wheeler originally described this as a variety of Myrmecocystus yuma, but noted that it would perhaps ultimately rank as an independent species. The abundance of differences, which here place the two in different subgenera, more than justifies that assumption.

When Creighton (1950) elevated Myrmecocystus flaviceps to full species he apparently did so because it and yuma were known to be sympatric. There is no evidence that he knew either from other than their type series and in the case of flaviceps the types are in very poor condition. Creighton separated the two on the basis of head shape and color.

The type series consists wholly of minor and media workers, some of them callow, and is exceptionally poorly mounted. I have been able to examine about two dozen of these specimens and between them have accumulated the characters permitting the present interpretation. As now understood, this is a western form allied to Myrmecocystus romainei which replaces that species in low desert areas. It is a variable species, and possibly the present interpretation is too conservative.

There is some variation in the size of this species, other than the normal polymorphic variation. Workers from Calmalli and 26.9 mi S of El Arco, in Lower California, are the largest examples seen. The head length of the larger workers from these series is in excess of 1.4 mm. In these large individuals, the sides of the head are strongly convex, the head approaching the orbiculate condition of Myrmecocystus placodops and Myrmecocystus intonsus. Large workers from a sample collected 35 mi S of El Marmolito, Baja California, have the head length somewhat less (about 1.3 mm), but still retain the semiorbiculate shape.

Although the third tergum typically is uniformly covered with fine appressed pubescence, producing the characteristic gastric sheen, this is by no means con-stant. A few of the smallest workers from El Arco and Calmalli have the pubescence greatly reduced and it is absent (save a few widely scattered hairs) in the majority of the sample from El Marmolito.

The color of this species is quite variable. Southernmost samples from Lower California have the head and thorax brownish-red, the propodeum, legs and petiole darker; the infuscation sometimes extends over the entire thoracic dorsum and the top of the head. Specimens from Bahia San Luis Gonzaga, Baja California, are very extensively infuscated. The head, thorax and legs are light reddish in specimens from Shaver's Well, with the propodeum and petiole slightly darker. Samples from Death Valley have the head, thorax and legs light reddish, brighter than those from Shaver's Well, with only the petiole a little darker.

Workers of Myrmecocystus flaviceps from the Mojave Desert are very similar to those of romainei from Utah and central Arizona. The characteristic punctation of the vertex of Myrmecocystus romainei become weaker and sparser than in the more eastern populations of that species. They may be confused with flaviceps. In general, flaviceps workers from the Mojave Desert have twelve or fewer erect hairs on the malar area. There is, however, sufficient variation to make this character uncertain.

The erect pronotal hairs of flaviceps seem consistently less than 0.5 x MOD. In romainei there is less constancy, but those populations in which the hairs are 0.5, or less x MOD are eastern. The specimens from Utah and central Arizona have longer hairs, 0.57-0.62 x MOD. 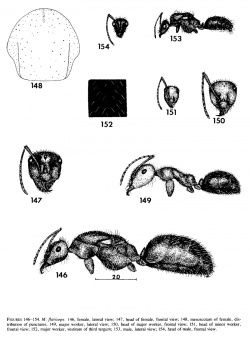