This ant appears to be a depauperate derivative of Myrmecocystus placodops which it closely resembles, especially in the strongly orbiculate head of the major workers. In addition to the much smaller size it differs from placodops, and other species in the melliger group, by the sparsely pubescent third and fourth terga. There is also a resemblance to such species as Myrmecocystus koso and Myrmecocystus romainei in the romainei group, but these have far fewer erect hairs on the malar area and the longest pronotal hairs are, in the major workers, more than 0.5 x MOD. (Snelling 1976)

The type series was taken from a nest in sandy soil at the edge of an arroyo in a dense stand of mixed cardon, mesquite and palo blanco. The crateriform tumulus was about 4 ½” diam. Workers were actively foraging at midday, ambient temperature approximately 70°F, returning with miscellaneous insect fragments. Other ant species taken at this station: Pogonomyrmex californicus (Buckley), Pheidole vistana, Solenopsis xyloni, Conomyrma bicolor (Wheeler) and Forelius foetidus (Buckley).

Workers were observed also near La Burrera and Todos Santos. Nests were situated in sandy soil and were surmounted by low, regularly crateriform tumuli. One exceptional nest had the entrance sited in a clump of grass. Foragers were active during the hot part of the day in early October, with ambiant midday temperatures in excess of 90°F. Many workers were seen at the flowers of a prostrate Euphorbia.

Known only from workers. 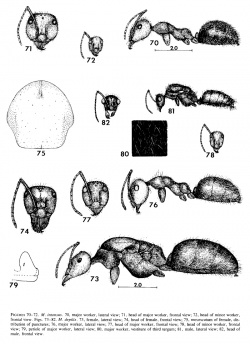 Erect hairs abundant on head, with ten or more present on malar area in frontal view; longest occipital hairs half, or more, as long as minimum eye diameter. Erect thoracic hairs abundant on all dorsal faces and posterior face of propodeum; longest pronotal hairs less than half minimum eye diameter; mesonotal hairs about as long as those of propodeum. Petiolar scale with numerous short hairs on marginal surfaces. Terga with abundant discal hairs, progressively longer on succeeding segments, those of first segment shorter than hairs of hind tibia. Appendages abundantly hairy; scape with hairs on all faces; fore femur with at least ten erect hairs on inner face.

L., intonsus, unshaved, having reference to the abundance of erect hairs on all surfaces.