The shorter pronotal hairs will distinguish the worker of kathjuli from those of nequazcatl and wheeleri; the bicolored gaster will separate it from these and kennedyi. From kennedyi, which also has short pronotal hairs, further distinction lies in the consistently broader head of kennedyi, CI in excess of 90 in 88% of the specimens studied. No other species in this complex has eight-toothed mandibles.

Pale workers of Myrmecocystus flaviceps resemble this species but are recognized by the more abundant cephalic and thoracic pubescence, hence duller appearance, and broader head, in which CI exceeds 90 in more than 80% of the specimens studied. Also, the range of flaviceps in the Mojave Desert lies to the east of that of kathjuli.

United States. Known only from the western Mojave Desert of California.

The few records of this ant are all from Creosote bush desert where Joshua trees (Yucca brevifolia) are present. Known elevational amplitude is a little over 1000 feet, extending from 2355-3500'. Nests are constructed in desert washes in deep sand and are surmounted by a low broad crateriform tumulus up to 17 em in diameter. Foraging is diurnal, and the workers have been collected at floral nectaries. The sexual forms were present in the type series nest on 31 Mar. 1972 and a dealate female was taken on the ground at Red Rock Canyon on 1 May 1971. 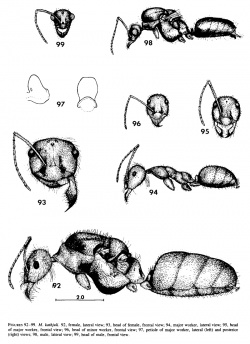 Thorax: Slender, PW 0.36-0.44 (0.41) x WL. Mesonotum evenly sloping to metanotum. Propodeum higher than long; in profile, wholly convex from base to apex, without defined basal and posterior faces. Petiole: In profile, broadly cuneate, with rounded crest; from behind, crest flat or gently convex, without median notch.

Malar area with six or fewer fine erect hairs; longest occipital hairs little shorter than EL, much exceeding MOD. Pronotum with about 8-12 erect hairs, longest equal to about 0.5 x MOD; mesonotum with about twelve erect hairs, longest less than 0.5 x MOD; propodeum with about an equal number of similar hairs. Crest and sides of petiolar scale with a few fine erect hairs. First three terga with discal hairs sparse, shorter than apical thickness of hind tibia, hairs longer on margins, on succeeding segments and on sterna. Short, erect hairs numerous on anterior and lateral scape surfaces, all surfaces of femora (except inner face of fore femur) and exterior surface of tibiae.

Thorax: Robust, PW 0.57-0.62 x WL. Posterior half of scutum and anterior half of scutellum forming an even, flattened plane. Basal face of propodeum distinct, sloping toward posterior face which it meets in a weakly defined angle.

Vestiture: Pubescence sparse over most of head, longer, denser on occiput and malar area, generally appressed, but some on occiput decumbent. Thoracic pubescence dense on pronotum, sides and propodeum, sparse on scutum (but denser on parapsis) and scutellum. First five terga with dense appressed pubescence. 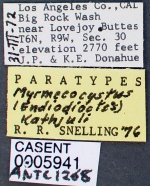 The specific name is compounded from the first four letters of the names of the collectors of the type series, Katherine and Julian Donahue, to whom this species is dedicated.