Mojave Desert of California and Nevada.

Snelling (1976) - Little is known about this species. The type locality is Mojave Desert Creosote Bush Desert. Most of the samples available are from areas of Saltbush-Greasewood Desert. Nests are located in fine sand, with a crateriform tumulus up to 10 cm in diameter. Workers forage both matinally and crepuscularly and are general food gatherers. Repletes have been collected from nests in Death Valley.

Within Death Valley, where the species is common, the elevation range is from -200' to 1600'. At Ashford Mill, in Death Valley, I found workers departing from the nest and running along a single trail toward a foraging area. The trail was very poorly defined and it is not certain it can be properly called a trail. It might be that this was merely the most commonly used route to a known foraging area.

Since the sexual forms are unknown, it follows that nothing is known of flight activities. Presumably mating flights take place after spring and/or autumnal rains.

The queen and male castes are unknown. 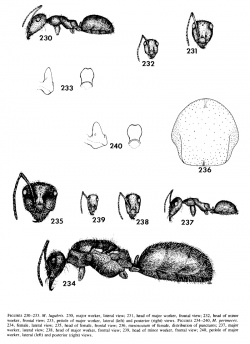