Nests of this ant typically occur on rocky slopes.

In central Mexico this ant ranges up to elevations of about 8200 feet; proceeding north, elevation decreases to about 5000 feet in Texas. It is an ant of semiarid mountain habitats, with most records from Oak-Juniper Woodland, a few in Pinon-Juniper Woodland.

Snelling (1976) - Wheeler (1908) reported on this ant, as comatus, in the Davis Mts. of Texas. He observed workers ascending oak trees, possibly to visit aphids, but none of the returning workers had enlarged gasters. Wheeler found no repletes in the nests he examined and, from the large amounts of insect fragments in the detritus piles, concluded that the ant is predatory. According to his field notes, Creighton found workers at Ft. Davis Park "... cleaning up an exposed termite colony with zeal and vigor." Semirepletes were found in the colony.

Nests are located on rocky slopes, sometimes with the entrance adjacent to a stone. A tumulus may or may not be present. When present it usually is irregular, not at all regularly crateriform. Although the ants are consistent predators on small insects, they do solicit aphids for honey dew and visit flowers for nectar. I have found repletes in a colony studied in the Jeff Davis Mts. and some of the original series described by Forel are repletes.

Snelling (1976) - The synonymy of comatus with Myrmecocystus melliger by Snelling (1969) has already been discussed in that earlier paper. It is sufficient to state that there is no characteristic by which comatus may be separated.

This largely Mexican species extends north along the Sierra Madre Oriental barely entering the United States through the mountains of the Big Bend of western Texas, as far as the Jeff Davis Mountains. The latter are the type locality for comatus. The southernmost records are from the State of Puebla, Mexico. From the Sierra Madre Oriental the species ranges westward onto the central plateau of Mexico at suitable elevations. The incidence of melliger decreases sharply in the vicinity of the Sierra Madre Occidental. Extensive collecting in these ranges has produced few records. A single record exists for the State of Sonora, based on a single specimen which may prove to be Myrmecocystus mendax.

The populations of large, long-haired Myrmecocystus from New Mexico and Arizona, heretofore thought to be melliger, or its junior synonym comatus, are now believed to represent a long-haired variant of mendax. These are discussed more fully under that species. The species most closely related to melliger apparently is mendax, for the workers of the two are very similar in details of head shape, punctation, and petiolar shape. The females, also, are very similar. The apparent closeness is further enhanced by the long-haired mendax variant which is extremely similar to melliger.

The differences are subtle but constant in the material available. They are best appreciated when comparative material of both species is available for direct comparison. The distinctions are based on large workers with head width in excess of 1.5 mm; smaller workers are much more difficult to separate.

The longest occipital and pronotal hairs of melliger are longer than the eye length, as are those on the disc of the second tergum (Fig. 37). Those of the pronotal disc are very slender and are prone to curl apicad; the appearance is one of "woolliness." The long-haired variant of mendax usually has the longest occipital hairs not exceeding eye length. The pronotal hairs are also usually shorter than, but may be equal to, eye length and the discal hairs of the second tergum are always less than eye length. The pronotal hairs are gently and evenly curved and there seems to be no tendency for these to curl apicad; the appearance, then, is one of "hairiness" rather than "woolliness." 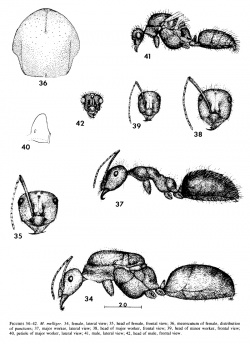 Petiole: In profile, thick, not at all cuneate, summit broadly rounded; crest, in frontal view, narrow, evenly rounded from side to side, without median notch.

Vestiture: (Based on workers with PW in excess of 0.8 mm). Cephalic pubescence general, but sparse, especially on malar area, densest on frontal lobes and occiput. Thoracic pubescence least abundant on dorsum, concealing surface only on propodeum, as a rule. First three (minors) or four terga densely pubescent.

Vestiture: Cephalic pubescence dilute, most conspicuous on frontal lobes, vertex and occiput. Thoracic pubescence general, but sparse, especially on dorsum; longest on pleurae and sides and base of propodeum. All terga with conspicuous, but thin, pubescence; first two segments without median apubescent areas.