The most well studied Myrmecocystus species. They are nocturnal foragers that gather a variety of exudates and, although not a major part of their diet, also scavenge dead insects.

A member of the mexicanus group of the Myrmecoystus subgenus Myrmecocystus .

Mackay and Mackay (2002) - This is a pale yellow ant with black eyes. The head length of the largest workers exceeds 1.3 mm, the eyes have few or no short, erect hairs, the propodeal dorsum is evenly convex and abundantly hairy and the metanotal suture is usually distinctly impressed. This species can be easily confused with Myrmecocystus navajo.

Snelling (1976) - This is a species of the Sonoran and Transition Zones, with most records from areas in the Sonoran. Within the Sonoran Zones, it appears to be about equally abundant in Lower and Upper Sonoran habitats. In Colorado, Gregg (1963) recorded this species (as mexicanus hortideorum) from Pinon-Juniper Woodland, Pinon-Cedar-Oak Woodland, Sagebrush Desert, Sagebrush-Greasewood Desert and Saltbush Desert. The elevational amplitude in Colorado was noted to be a little over two thousand feet, but Gregg correctly noted that over the entire range of the species it would be much greater. In southern California, the lowest elevation is below sea level (-225 feet) at Salton Sea Beach and the highest is 5185 feet above sea level at Salton View in Joshua Tree National Monument, less than 45 miles to the north. The greatest elevation record is 8000 feet, 6 mi NE Santa Fe, New Mexico.

In New Mexico (Mackay and Mackay 2002) – Occurs in typical creosotebush desert scrub, sagebrush, oak woodland up to pinyon-juniper. This is one of the most common species of Myrmecocystus in New Mexico.

This is the most extensively studied of all the species of Myrmecocystus. McCook (1881, 1882) published the results of his studies in Colorado; these were supplemented by Wheeler (1908). Briefly, the species forages at night, less commonly on cool, overcast days. Workers emerge singly and seek out food items. The ants derive much of their sustenance from exudates from galls on oaks (Quercus spp.) as well as from aphids and pseudococcids (Homoptera). They also take juices from bruised or broken fruits which may be available, such as those of cacti (Opuntia spp.) and nectar from a wide variety of flowers and from extrafloral glands.

The ants are by no means wholly dependent upon nectar and fruit juices, for they are assiduous general scavengers. In general, however, this species seems not to be an active predator. I have rarely observed it attacking live insects. On those occasions when I have made such observations, workers were picking up insects attracted to lights at night. Foragers would rush up to an insect and grasp it with the mandibles. If the prey was much smaller than the ant it was immediately carried away. If of a size approximately equal to that of the ant and struggled, it was released and the ant would dart away.

Most protein material brought to the nest consists of fragments of already dead, often desiccated arthropods. Colonies observed in southern Arizona regularly picked up head capsules of Pogonomyrmex spp. from detritus piles around the nests of the harvester ants.

Foraging is an individual matter for the most part. The usual pattern seems to consist of an initial mass exodus of workers at the onset of the foraging period. The workers quickly radiate in all directions. Obviously, if there are previously visited sources of food in a limited area, such as a plant harboring large numbers of aphids, a sizable percentage of the foragers ultimately arrive there, but there are no foraging "trails" as such.

Flight activities of the sexual forms are not well documented and most of the available reproductive have been removed from nests. The mating flights occur during summer or fall rainy seasons, apparently in late afternoon or early evening following an afternoon rain.

Cole et al. (2001) - We examined the spatial pattern of the ant Myrmecocystus mexicanus and although intraspecific dispersion is highly uniform, colonies were significantly associated with reproductively mature nests of the harvester ant Pogonomyrmex occidentalis. Colonies of M. mexicanus were more likely to be found within 3m of P. occidentalis and less likely to be found as far as 10m away. The protein component of the diet of M. mexicanus is almost exclusively dead or moribund workers of P. occidentalis. M. mexicanus appears to associate with one of its consistent food sources.

McCook (1882), Wheeler (1908) and Gregg (1963) have noted that the tumulus marking the entrance of the nest is crateriform and is constructed of coarse gravel and pebbles. Occasionally, nests may be situated in fine, deep sand, in which case the tumulus consists of much finer particles, though even then the coarsest particles available are used. Nests of this species seem always to have but a single entrance which may be as much as 2.3 cm diameter at the surface.

Snelling (1976) - The traditional interpretation of Myrmecocystus mexicanus, and that which is continued here, is probably not correct. I believe Wesmael's specimens most likely belonged to the species here called Myrmecocystus melanoticus. Since the lack of authentic mexicanus renders this assumption beyond proof, it seems least disruptive to continue established usage.

The northern populations, extending from Colorado to the Pacific Coast have usually been recognized as a more uniformly yellowish subspecies. I have here synonymized that "subspecies" because I do not believe its continued recognition is defensible. One reason for so doing is based on the broadly clinal nature of the color pattern; because of the existence of such a pattern, it is not possible to define the color forms in such a way as would permit their recognition. An attempt to continue recognition of these color forms results in about one-half the material being impossible of assignment.

More important, however, is the fact that the populations of the "subspecies" hortideorum are not equivalent to one another. Workers from Colorado and Utah are, as a rule, more densely hairy than some from California and Lower California. Workers from many western populations have about 16 erect and suberect hairs per 0.50 mm of scape length, a condition about the same as in specimens from Colorado. Specimens in other samples have about half that number. In some areas, such as Pearblossom, Los Angeles Co., Calif., the inhabitants of adjacent nests may differ widely in this regard.

Males from California and Lower California usually possess fringe hairs along the apical margin of the forewing. Those from Colorado do not, a trait which they share with those of "typical" mexicanus from southern New Mexico and Arizona and central Mexico. Fringe hairs are wholly lacking from both fore and hind wings in males collected at Cajon Canyon, California. In this regard these males are more like the eastern males of this species. The petiole, however, is not as in the males from Colorado.

Normally the petiole in Colorado males, in profile, is cuneate and sharply crested. Those from California are inconsistent and while it may be as sharply cuneate as in the Colorado males, the petiole is often broadly rounded in profile, but males from any single locality seem to be extremely variable in this character. The few males available from central Mexico consistently possess a broadly rounded petiolar node. 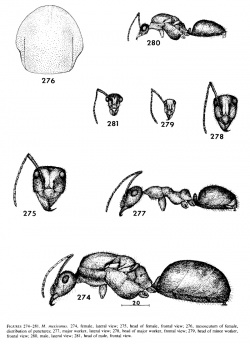 Head: Longer than broad in all sizes, CI 70-94 (78), much shorter than scape, SI 114-149 (122). In frontal view, malar margins straight and subparallel in small workers, in largest workers widest at level of antennal sockets, convergent toward mandibular insertions below; occipital margin flat or slightly convex, usually well above top of eye, sometimes barely so in smallest workers. Eye large, 1.09-1.20 (1.14) x length of first flagellomere; OMD 1.09-1.72 (1.37) x EL. Mandible usually with nine teeth, but commonly with ten, rarely with eight; space between basal and subbasal teeth not exceeding size of basal tooth.

Petiole: In profile, robust cuneiform, with rounded crest; crest, in frontal view, weakly or not at all notched.

Thorax: Robust, PW 0.53-0.61 x WL. In profile, scutum flattened behind, scutellum convex, not in line with posterior part of scutum.

Petiole: In profile, compressed-cuneate; crest sharply notched in frontal view; from above, about twice wider than long.

Vestiture: Cephalic pilosity about as described for worker. Mesoscutum and scutellum with scattered, long (up to 0.23 mm) erect hairs arising from coarse punctures; pleura with scattered long erect hairs; propodeum with a few short (up to 0.10 mm) erect hairs on upper third. Petiolar scale with numerous erect hairs. Discs of terga with abundant stiff erect hairs, progressively longer on succeeding segments; sterna with hairs longer, more numerous on apical half; appendages, including inner and lower surfaces of fore femur, with abundant erect and suberect hairs of moderate length. Wings without fringe hairs on apical or posterior margins.

Petiole: In profile, cuneate and sharp-crested to broadly rounded above; in frontal view, crest with more or less distinct angular notch.

Vestiture: Erect hairs sparse on head and thorax; those of occiput short (up to 0.10 mm), much shorter than MOD; a few longer (up to 0.16 mm) on malar area. Scutal hairs about equal to those of occiput, longer (up to 0.16 mm) on scutellum; hairs very sparse on pleura, little, if any, longer than on scutum. Propodeum commonly without erect hairs except near valvule, but a few very short hairs may be present on basal face. Petiolar node with sparse, short erect hairs. Terga with sparse, fully erect hairs, up to 0.10 mm on disc of second segment; sterna with hairs more numerous, longer, up to 0.23 mm on second segment. Appendages with sparse to abundant erect and suberect short hairs; forewing with or without apical fringe hairs; hind wing with or without fringe hairs along apical and posterior margins.